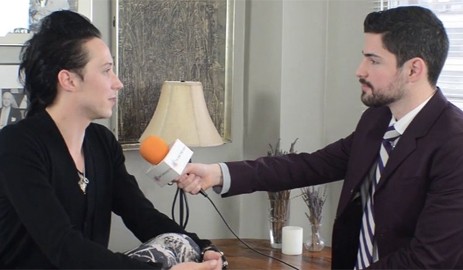 Weir plans return to the Olympics

Chicago, IL - Two-time Olympic figure skater, three-time US National Champion, and star of his own reality TV series, Johnny Weir, was recently in Chicago to co-host the 5th Anniversary Celebration for Scarlet in Boystown.

The celebrity figure skater sat down for an exclusive interview with TJ Chernick for Gay Chicago TV and ChicagoPride.com.

"I think my time off the ice has really shown me what life can be outside of training for the Olympics," said Weir. "Everyday is a new challenge and I enjoy that."

Weir officially came out as gay in his memoir "Welcome to My World" published in January 2011. He married Victor Voronov, a Georgetown Law graduate of Russian Jewish descent, in December 2011. The couple are celebrating their first anniversary this month.

"I will try my best. If I qualify, great, it will be my third Olympics," he told Gay Chicago TV.

Also on topic was the return of Weir's reality series, "Be Good Johnny Weir", and his upcoming appearance on "Rachael Vs. Guy: Celebrity Cook Off", which premieres Sunday, Jan. 6 at 8 p.m. (CT) on the Food Network.

Gay Chicago TV is a community media partner of ChicagoPride.com and the GoPride.com Network.