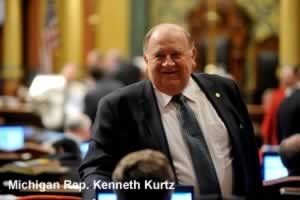 Lansing, MI - Michigan lawmakers ended their legislative session without voting on a trio of bills which sought to legalize discrimination against LGBT people.

Two bills introduced by state Rep. Kenneth Kurtz, a Republican from Coldwater, would have allowed adoption agencies to refuse services based on moral or religious beliefs. The bills cleared the House Committee on Families, Children and Seniors but did not reach the House floor for a vote.

A third bill introduced by state Senator John Moolenaar, a Republican from Midland, granted similar exemptions to healthcare professionals. The bill cleared the Senate but also did not reach the House floor for a vote.

"This legislative session Michigan extremists seemed suspiciously motivated to keep hurling a wrecking ball at Michigan families," said Dievendorf in a statement. "Fortunately, somebody in Republican leadership realized that the passage of these destructive bills would not be easily forgiven by a majority of Michigan citizens whose support for equality is on the right side of history, and leaders quietly ignored the bills which would have provided countless licenses to discriminate. Michigan voters are much to thank for this change of heart as they stood united, sending thousands of emails demanding that our elected officials end their attempts to deny potential homes to the over 5,000 foster children eligible for adoption. Michigan citizens also insisted that we enforce the powerful tradition of the Hippocratic Oath when providing health care."