No action from Supreme Court on gay marriage cases 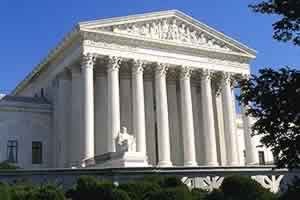 Washington, D.C. - The Supreme Court on Monday took no action on cases involving marriage rights for gay and lesbian couples.

(Update: SCOTUS on Friday agreed to take up gay marriage)

The court was expected to consider cases involving the Defense of Marriage Act (DOMA), Proposition 8, California's gay marriage ban, and an Arizona law which repealed benefits for the domestic partners of state employees.

"The U.S. Supreme Court has not yet made an announcement about whether it will hear the Prop 8 or DOMA cases," Adam Umhoefer, executive director of the American Foundation for Equal Rights (AFER), said in an email to supporters. "With five cases currently before them dealing with issues related to marriage for gay and lesbian Americans, there is no doubt the Justices have much to consider."

AFER was formed to challenge the constitutionality of Proposition 8, California's 2008 voter-approved amendment which put an end to the weddings of gay couples taking place in California after the state Supreme Court legalized such unions.

Should the high court decide against reviewing the case, then an appeals court's ruling declaring the amendment unconstitutional would stand, paving the way for the resumption of gay nuptials in California.

Umhoefer added that his organization remains optimistic "that the Justices will soon act in our case, either agreeing to hear our arguments or allowing gay and lesbian couples to marry in California."

The court's next scheduled conference to consider new cases is on Friday, December 7.