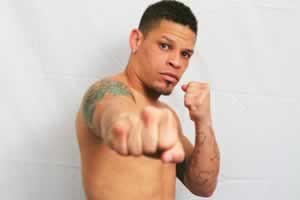 Two weeks ago, the 31-year-old Cruz released a statement in which he said that he is "a proud gay man," making him the first boxer to come out during his career.

Cruz won his bout against Jorge Pazos on Friday by unanimous decision.

"That was my moment, my opportunity, my event," Cruz told ESPN after the fight. "And I won."

He said that he was touched by the support he received from the crowd at the Kissimmee Civic Center outside Orlando, Florida.

"I was very happy that they respect me," he said. "That's what I want – them to see me as a boxer, as an athlete and as a man in every sense of the word."

Cruz said the win was "going to open my door for a world title fight."

He said of his new position as an openly gay role model: "I'm only one person. I feel happy with where I am. I'm free. I'm more at peace."