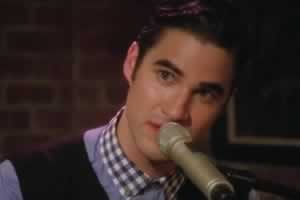 Darren Criss is putting a positive spin on the end of his television romance with Chris Colfer on the Fox musical-comedy Glee.

In last week's episode, titled The Break-Up, Blaine (played by Darren Criss) visited Kurt (Chris Colfer) in New York City, where Kurt is now working as an intern at Vogue.com. Blaine revealed to Kurt that he was having an affair with Eli, whom viewers have yet to meet.

But is this the end for TV's most adorable gay couple?

In an interview with TVLine.com, Criss left the door open.

"It's very open-ended," Criss said of his character's affair. "We don't know who this person is or what this decision was."

"I would love to see them [Blaine and Kurt] be a part of each other's future relationships. If Kurt meets someone new and they are having some problems, I hope Blaine is the person that Kurt calls and says, 'This is really tough for me.' And vice-versa. That happens in real life with all kinds of relationships. You create a bond with somebody and regardless of what happens, in the end the bond is there for the rest of your life. And I think that's an excellent message to show young people: The end doesn't mean it's the end. It's just a new chapter."