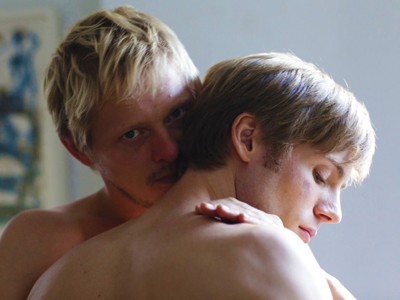 "keep the lights on" among lgbt selections at festival

"The 30th anniversary was a milestone and it felt like it was time to take stock of the festival and think about what we envisioned the festival could be in the next phase of its existence," Brenda Webb, the founder and director of Reeling for the last 30 years, told ChicagoPride.com. "Producing the festival is a bit like being on a treadmill, as soon as one festival is over, the planning begins for the next one. This leaves little time for reflection, assessment, reinvention, critical self-analysis, long-range planning, etc."

Webb ensures the festival's devotees that Reeling, the second oldest LGBT film festival in the world, is only on hiatus and not fading away -- it will be back next year, hopefully better than ever. One of the biggest changes to the festival is Webb's decision to step down as Director and focus on her position as the Executive Director of Chicago Filmmakers, the organization that produces Reeling. To that effect, the Chicago Filmmakers' board is currently in the planning stages of a fundraising campaign to help raise money for a new festival director.

Planning for the changes to the festival itself revolves heavily around community input. The board has already scheduled two brainstorming meetings for next month: one for local filmmakers, to assess their needs as artists, and the other for past Reeling members and volunteers, to get their perspective as audience members and volunteers. Webb hopes that their feedback about the strengths and weakness of Reeling will come with ideas of how to strengthen the festival and enhance community involvement.

Other considerations include a change in the time of year the festival is held and expanding or evolving the festival to better fit the changing needs of independent LGBT filmmakers entering a digital age. Additional information about Reeling can be found at http://reelingfilmfestival.org and Webb asks that any feedback or ideas from interested parties be emailed to reeling@chicagofilmmakers.org.

"We are committed to continuing the festival but we want it to be under better conditions -- for the community and for ourselves," Webb said. "There was a considerable amount of anxiety and concern around our decision to put Reeling on hiatus this year -- we didn't want to let down the LGBTQ community or disappoint people, especially our valued and esteemed "regulars" who come to the festival each year -- many of whom have been attending for decades, even some who have attended since the first year."

The 48th Chicago International Film Festival starts this week, running from October 11-15, featuring 120 full-length films representing 53 countries (as well as 50 short films), which are broken up into several competition and out-of-competition categories. One of the out-of-competition sections is called OUTrageous and features, as the website describes, "bold gay-themed films [that] fearlessly exhibit new artistic perspectives on sexuality."

There are six films representing seven countries in the OUTrageous category this year, includings dramas, a documentary and many stories of love. The first queer flick to show is the story of a one-night-stand turned nine-year relationship and the limits of love as tested by one partner's drug addiction. "Keep The Lights On" is based on director Ira Sachs' relationship with literary agent Bill Clegg, who also tells their story in his memoir "Portrait of an Addict as a Young Man." Sachs is scheduled to attend both showings of the film, which take place on Friday the 12th at 8:30 p.m. and the following day at 2:00.

This year's OUTrageous category features two additional tales about star-crossed lovers. "Out in the Dark" ("Alta / Dhalam"), a film in Hebrew and Arabic with English subtitles, tells the story of a Palestinian student who falls in love with an Israeli lawyer, playing on the dual themes of sexual orientation of national identity in their corner of the world; and the relationship between a painfully shy middle-aged intellectual and a loud outgoing teenager is chronicled in the Mexican film "Everybody's Got Somebody... Not Me" ("Todo El Mundo Tiene A Alguien Menos Yo").

Alan Cumming, who was named an honoree by the OUTrageous category two years ago, stars in "Any Day Now" as a drag performer dating a closeted lawyer in the 1970s; the pair first take in a mentally handicapped teenager and must then fight against the biased court system in defense of their unconventional family. "El Bella Vista," the only documentary in the category, weaves a tale of the power struggle over a mundane building (a soccer team's abandoned clubhouse) in provincial Uruguay between the town's trans prostitutes, who are using it as a brothel, and the concerned residents who seek to reclaim the building and turn it into a Catholic chapel.

Another documentary showing during the festival, but not as part of the OUTrageous category, is "The Jeffrey Dahmer Files," which uses interviews, archival footage and recreation to paint a surprisingly human portrait of Milwaukee's notorious gay serial killer, who murdered and dismembered some 17 men and boys, mostly in the late 80s and early 90s. Another queer flick not included as part of the OUTrageous category is the experimental short film by Fawzia Merza "The Queen of My Dreams," which explores the feminine perfection of Bollywood heroines through a queer lens.

For more information about, or to view showings and purchase tickets for, any of these (or other) films showing at the Chicago International Film Festival, please visit their website at http://www.chicagofilmfestival.com.