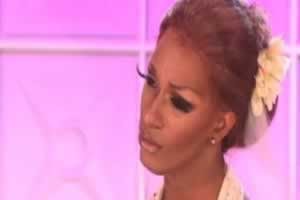 Davenport, a contestant on the second season of RuPaul's Drag Race, died Monday at Johns Hopkins Hospital in Baltimore at the age of 27.

Logo, the network behind the drag reality series, mourned the loss in a statement released Tuesday.

"Logo is profoundly saddened by the passing of Antoine Ashley who fans around the world knew and loved as Sahara Davenport," Logo said in a Facebook post.

A representative for Davenport said on Wednesday that the drag star died from heart failure.

In the 90-second video, Davenport is seen in various competitions on the show, including the competitor's final appearance.

Show host RuPaul is seen telling the contestants: "It has a lyric, 'Mama said never give up.' And I've used it as my anthem. I want each of you girls to know that even through adversity or death: love, energy live forever."