Chick-fil-A's agreements "not an end game" 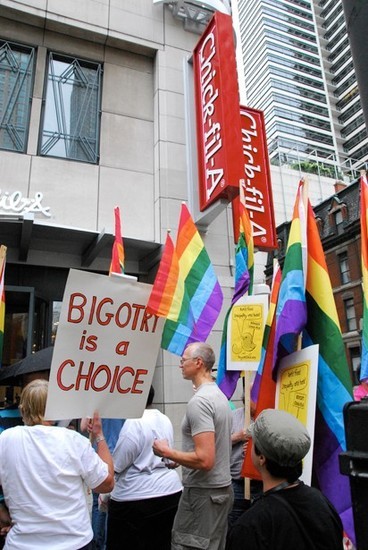 Chicago, IL - A long summer of protests and counter-protests were capped off this week with the news that the Atlanta, Ga.-based fast food chain Chick-fil-A had agreed that it would no longer contribute to anti-LGBT causes through its WinShape Foundation. The company also said that it would distribute an internal memo that would emphasize that all employees were to be treated equally, regardless of many criteria, among them sexual orientation.

Chick-fil-A's agreement wins them the support of Ald. Proco "Joe" Moreno (1st), who had refused to allow the chain to sub-divide a parcel to open a store at 2538-70 N. Elston Ave. The refusal sparked enormous controversy in Chicago, and even Mayor Rahm Emanuel weighed in, saying, "Chick-fil-A's values are not Chicago's values."

The chain, pursuing an aggressive expansion in urban centers and on college campuses, encountered protests in other parts of the country. Chick-fil-A became a cause célèbre on both the left and the right. Right-wing politicians tweeted photos of themselves proudly carrying Chick-fil-A bags in hand. The restaurants' detractors were no less virulent; one Arizona man lost his job after he posted a video of himself confronting a stymied Chick-fil-A drive-thru cashier to Youtube.

But Chick-fil-A's agreement, for the moment anyway, seems to at least slow down the controversy.

"I think the most substantive part of this outcome is that Chick-fil-A has ceased donating to organizations that promote discrimination, specifically against LGBT civil rights," wrote Anthony Martinez, exec. dir. of The Civil Rights Agenda, in a Sept. 18 statement that said Moreno had negotiated the agreement with TCRA's assistance.

"It has taken months of discussion, both with our organization and with the Alderman, for Chick-fil-A to come forward with these concessions and we feel this is a strong step forward for Chick-fil-A and the LGBT community, although it is only a step," Martinez added.

"This fight was never about ‘freedom of speech' or ‘freedom of beliefs,'" Moreno said in a statement. "Despite common characterization, this fight was about ensuring the rights of LGBT citizens everywhere to fair employment."

Moreno added that he had written assurances from Chick-fil-A's Senior Dir. of Real Estate that donations to anti-LGBT causes had ceased.

In an interview with ChicagoPride.com, Martinez reiterated that the promises Chick-fil-A has made up until this point were "not the end game," and that TCRA would be asking Chick-fil-A to establish an official policy prohibiting discrimination against LGBT employees.

"An internal memo is a start, but it doesn't really hold any water," Martinez said. "As time goes on, and employees come and go, people will forget about an internal memo—there needs to be something permanent that signifies to all employees that discrimination will not be tolerated."

Moreno and TCRA began their talks with Chick-fil-A in January of this year, after Martinez heard about the plans to move into the First Ward. Moreno was receptive to TCRA's concerns about the restaurant chain's history, Martinez said.

The talks with Chick-fil-A's representative were frustrating and revealing, he added. As an organization, Chick-fil-A wears religion on its sleeve. Stores are closed on Sundays, for example, and the company explains the policy on its website by saying it reflects a larger corporate purpose: "To Glorify God by being a faithful steward of all that is entrusted to us."

The company "needed a lot of education—I didn't feel like (the representative) knew any gay people," according to Martinez. "At one point he said, ‘you chose to be this way,' and that set us off."

But Martinez said both sides were especially cognizant of the stakes in the talks. "For us it was especially important to stop the flow of money into these anti-gay organizations, especially organizations that said it was possible to be cured of that, which we all know is impossible."

"But they were looking to expand in urban areas and universities, and they were starting to realize that they needed to make a change to allow them to move into the First Ward," he added.

The goal of having official anti-discrimination protection for LGBTs in the employee handbook is a tall order for Chick-fil-A, which has been sued many times and often settles out of court. Indeed, the company broke off contact with TCRA shortly after the summer's media firestorm took place, according to Martinez. After the September announcement, many supporters of the company's policy accused it of selling out. USA Today reported Sept. 20 on a number of Facebook postings on Chick-fil-A's page from outraged customers.

Martinez admitted that it was difficult to predict where Chick-fil-A goes next and said that activists would have to be vigilant in monitoring the organization, especially in terms of tracking its contributions through WinShape.

On Sept. 20, Advocate.com reported that Chick-fil-A President Dan Cathy, whose remarks that Chick-fil-A was "guilty as charged" in supporting "traditional family" stirred much of this summer's controversy, tweeted a photo of himself participating in a bike ride that supported the Marriage and Family Foundations, a charitable organization identified as having opposed same-sex marriage.

Chick-fil-A's previous commitments and the extent of their financial contribution is not known, but the chain's logo appear in several spots on the event's registrations materials. Though WinShape organized the event, registrants were directed to make checks payable to Marriage and Family Foundations, according to the Advocate.

"At this point, we just can't take their word for it, about what they're doing," Martinez said. "That's something we're going to have to be watching very closely."

Shortly after the Advocate story broke, Martinez issued a statement reiterating TCRA's commitment to keeping Chick-fil-A and WinShape in its sights.

"In the best case, we hope that this is a road-bump in what is typically a long process. In the worst case, they have lied and distorted their intentions. Only time will tell," concluded Martinez.