AIDS Run and Walk Chicago, Sept. 30, is personal for participants 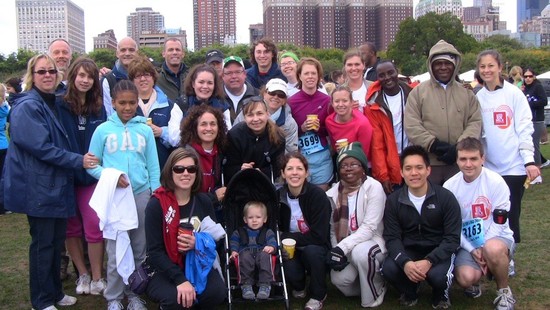 lisa m. williams with group in 2011 (left, behind stroller)

Thousands gather at Soldier Field, Sept. 30, to Run and Walk against HIV/AIDS

Chicago, IL - Many of the participants in the 11th annual AIDS Run and Walk Chicago have had their lives touched by the HIV/AIDS epidemic and others face it each day. Both can be said for Lisa M. Williams, an HIV Advance Practice Nurse at Northwestern Memorial Hospital who, for the past decade, has walked to honor the memories of her brother John and cousin Tim, both of whom died of complications due to the disease. Williams started in the HIV/AIDS field in 1987, the same year that AZT was introduced, and saw many patients die on the road to finding the truly effective treatment we have now. The current problem facing the epidemic centers around improving access to all HIV/AIDS-related services, including both treatment and prevention.

"This event is important to me because I see every day in my work with patients that the services provided by the funds raised are critical," Williams told ChicagoPride.com. "My kids didn't have the opportunity to meet their Uncle Johnny, but every year, since they have been in a strollers, they have been at the Walk witnessing the importance of community involvement and service."

While there have been similar events over the years, the AIDS Foundation of Chicago (AFC) launched the AIDS Run and Walk Chicago in 2001 in partnership with Special Events Management to help raise awareness and funds for the fight against HIV/AIDS. This year's event takes place on Sunday, September 30 at Soldier Field, located along Lake Shore Drive on Chicago's Near South Side. The event offers something for everyone, including walking and running components, two timed distances -- a 5k and a 10k -- for runners, entertainment and a medley of local business vendors and AIDS organizations educating the public.

"Providing education to event goers is critical to us at AFC," David Munar, the President and CEO of the AFC, told ChicagoPride.com. "That is why each year we make sure we have displays and interactive stations for people to learn how to get more involved and learn what else they can do on the other 364 days of the year to support the cause."

Hundreds of teams representing schools, universities, clubs, families and places of work, such as the Northwestern Memorial Hospital team Williams started a decade ago, join 35 CommunityDirect teams, which are formed by the benefitting organizations of the AIDS Run and Walk Chicago. Hundreds of other individuals also join the event to show their continued dedication in the fight against the HIV/AIDS epidemic and to help raise funds that benefit the AFC and other Chicago-area organizations that provide HIV prevention, care, housing and other services to those living with or at risk for HIV in Chicago.

"The crowd is a cross-section of Chicago: from young kids with their parents to university students, couples -- gay and straight -- and great networks of friends, coworkers, family members of all ages," Munar said. "It reminds you that HIV/AIDS knows no borders and every corner of Chicagoland has been affected by this deadly disease."

In 2012, Munar says, we are at a crossroads in the HIV/AIDS epidemic. Annually, more than 1,500 Chicagoans become infected with HIV, with those numbers climbing to an estimated 50,000 new infections nationwide. New infections continue to disproportionately affect gay and bisexual men, with one of every two infections resulting from male-to-male sexual contact.

African American heterosexual women are the second most affected group after gay men, with the disease also disproportionately affecting people in poverty and those with socio-economic hardships. Young gay men are the only group for which we've seen increasing rates of infection, with young men of color being especially at risk.

"For young black gay/bi men, the rate was three times the rate for white gay/bi men of the same age," Munar wrote in a blog about the event published last month in the Huffington Post. "A crucial point to make: This doesn't mean that black men are engaging in riskier behavior. In fact, the study found the disparity to be a result of social determinants, such as community viral load, poverty, education and access to health care."

We now have an incredibly effective treatment against HIV, which not only allows a greater number of HIV-positive people to lead long and healthy lives, but, if taken properly, reduces the risk of infection to another person by as much as 96%. The fact that today's treatment can serve the dual purposes of saving lives and slowing transmission is a remarkable achievement, but a persistent stigma against HIV/AIDS and the resulting discrimination continue to prevent many people from accepting the testing and treatments they need. Currently, fewer than half of all people living with HIV receive continuous clinical care or treatment.

"That is where the AIDS Foundation of Chicago and the organizations supported by the AIDS Run and Walk come in," Williams said. "I have patients who, without the homemaker services provided through the funds we raise, would be in nursing homes. Many would be in shelters without the housing case management support or the food provided by organizations like Vital Bridges."

This year's AIDS Run and Walk Chicago features entertainment by Chicago-native singer-songwriter Adam Emil, comedian Wanda Sykes, five-time-Grammy-nominated musician Michael Feinstein and Jamar Rogers, an HIV-positive young man who was a finalist on the second season of NBC's "The Voice." Registration begins at 7:30 a.m. with the opening ceremonies taking place an hour later, races beginning at 9 a.m. and post-race entertainment slotted for a quarter after 10. Pre-registration for the event is closed, but those interested in walking or running can register the day of for $50.

For more information, or to make an online donation, please visit the event's website at http://afc.aidschicago.org/netcommunity/page.aspx?pid=1518.

Related: View photos from the 2011 AIDS Run and Walk Chicago