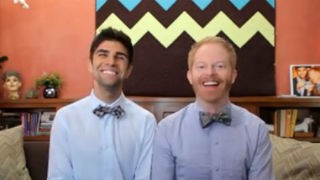 "And I said yes," Mikita chimes in as he jumps into the video.

Ferguson and Mikita created a collection of bow ties inspired by art and fashion. The bow ties will be available in November and proceeds will be donated to organizations fighting for marriage equality.

Ferguson plays Mitchell Pritchett, one half of a married gay couple on ABC's "Modern Family."