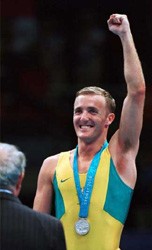 San Francisco, CA - At age 23, trampoline athlete Ji Wallace not only won a silver medal at the 2000 Olympic Games in Sydney but also captured the crowd's heart, waving and running circles around the floor.

Now Wallace brings a similar enthusiasm to support the 2006 Gay Games in Chicago as the first Australian to join the Gay Games Ambassadors, a group of prominent athletes and artists supporting the Gay Games and its guiding principle of "Participation, Inclusion and Personal Best".

"I truly appreciate the symbolism of a multi-sport event - the opening ceremony, what it means to be there and to compete", said Wallace. "The Gay Games can be anyone's Olympics and anyone's dream. The opportunity to compete in Chicago next year can be anyone's life-changing moment."

Wallace, now 28, retired from trampoline following his success in 2000. He pursued aerial skiing for two seasons, coached trampoline in China, and worked for Nike Asia Pacific. Earlier this year he decided to resume training with his sights set on competing at the 2008 Beijing Olympic Games. He also came out publicly as gay in April although he had been out to family and friends for many years.

Trampoline made its Olympic debut in Sydney, making Wallace's career seem charmed indeed. In the late 1990s he was just reaching his peak in the sport and qualified to participate in an Olympic Games in his home country.

"My first memory of life is actually of watching the opening ceremony of the 1980 Moscow Olympics - the flame, the dancing bear and the moving placards", Wallace said. "I guess I was destined to be involved at such an event. But the sport that I excelled in as a child was trampoline, which was not included until 2000."

Wallace won several national titles and made an international breakthrough in 1996 by winning gold in the double mini trampoline (DMT) discipline at the 19th Trampoline World Championships, held in Vancouver, British Columbia. He said that win inspired him to set even higher goals. While he did not medal in the individual DMT event at the 20th Trampoline World Championships in Sydney, he did set a still-unbroken world record there for completing a jump with the highest degree of difficulty in the DMT, a triple-triple.

In 1998 trampoline was added to Sydney's Olympic schedule and Gymnastics Australia hired the world's leading coach, Nicholay Zhuravlev, with a goal of leading the Australian team to a medal. Although the standard trampoline discipline was added, the DMT was not.

Wallace was training with Zhuravlev part time and made marked improvements. After Wallace placed 4th in the Olympic qualifying event in 1999, Gymnastics Australia assigned Zhuravlev to coach Wallace full time. The partnership continued to progress and Wallace credits Zhuravlev with the extra edge that helped him achieve his eventual silver medal placement in 2000.

One of the reasons Wallace cites for coming out of retirement is that his score in Sydney would have won gold at the 2004 Athens Olympic Games. He has already regained a spot on the Australian national team. He said, "I realized this is a calling of mine - hence, I am back on the trampoline, jumping my heart out."..

Drawing a parallel with the Gay Games, Wallace said that, although winning medals is great, "to compete in a prestigious event and compete next to your friends and your teammates" is what is "truly life changing." He said he is a better man for chasing his dreams and members of the LGBT community can experience the same feeling at the Gay Games.

Wallace also remembers watching the IOC announcement of the 2000 Olympic host and his excitement hearing that it would be Sydney. He said, "I am watching with anticipation who will be crowned the host for the 2010 Gay Games." Candidate cities for 2010 are Cologne, Paris and Johannesburg, and the Federation of Gay Games will select among them at the FGG's 2005 annual meeting in November.

"Ji represents a new generation of LGBT athletes who are out and open while still performing at the highest level in their sports," said Roberto Mantaci, FGG co-president. "We welcome him to the Gay Games family and look forward to supporting him as he continues training and competing in trampoline events around the world."