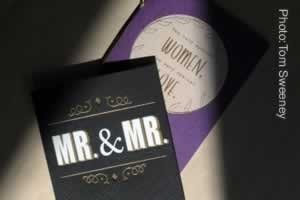 Minneapolis, MN - Target has started to sell a line of wedding cards for gay and lesbian couples.

Patrice Sadd, a spokeswoman for Carlton Cards, which is owned by American Greetings, said the company and Target together decided to offer "wedding cards relevant for everyone."