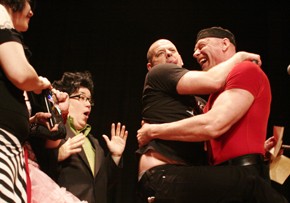 Queer rock singer-songwriter Scott Free snagged two Outmusic honors including the top award as Outmusician of the Year for his album, "They Call Me Mr. Free." And his song, "Another Day of Cruelty," was named Outsong of the Year. In addition, Windy City folk-rocker Dylan Rice received the Outstanding Debut Recording award in the male category for his album "Wandering Eyes."

Outmusic is a worldwide network formed in 1991 that actively works to support and promote the works of gay/lesbian musicians through open mics, showcases, seminars, CD samplers and music festivals as well as sponsoring the Outmusic Awards. For more information visit www.outmusic.com or call 215-923-8009.