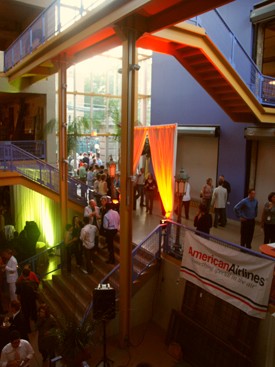 Chicago, IL - Artistic Director Eric Rosen and Managing Director Gregory Copeland proudly announce About Face Theatre’s 2005-2006 season including three spectacular and exciting World Premieres. Since 1995, About Face has presented compelling, electrifying new works that explore gender and sexual identity, by some of the nation’s best emerging and established theatre artists. During their first 10 years, About Face presented the premieres of some of the country’s most talked-about shows, including the Pulitzer Prize and Tony Award-winning I AM MY OWN WIFE; the Jeff Award-winning musical WINESBURG, OHIO, which will be produced at the Arden Theatre in Philadelphia, PA this fall; the World Premiere of Tennessee Williams’ ONE ARM, with Steppenwolf Theatre and Tectonic Theatre Project; and one of this season’s most exciting theatrical events, the Chicago premiere of Richard Greenberg’s Tony Award-winning TAKE ME OUT.

“This tenth anniversary is a huge milestone for About Face and we are delighted to offer our most ambitious season yet,” says Artistic Director Eric Rosen. “I am particularly proud to offer two beautiful world premieres by some of our country’s foremost theatrical imaginations, Frank Galati, Stephen Flaherty and Mary Zimmerman. Presenting their work alongside the deeply moving and challenging true-life stories of our remarkable Youth Theatre is a dream come true, and promises a tremendously exciting season for our audiences.”

“About Face is thrilled to bring these exceptional premieres to Chicago audiences and hopes to broaden its scope at the national level as well,” says Managing Director Gregory Copeland. “We have a new vision for our next ten years and are actively seeking ways to extend the life of our productions into the regional markets, to truly advance the national dialogue on gender and sexual identity in our country. This season’s work is the perfect launch for our new mandate.”

The season begins in February with the World Premiere of A LONG GAY BOOK, adapted and directed from Gertrude Stein’s text by Frank Galati with music by Stephen Flaherty, co-produced by the Museum of Contemporary Art (MCA), Chicago. A LONG GAY BOOK will be staged at the MCA Theater February 15 – March 12, 2006. The season continues June 8 – July 9, 2006 with the World Premiere of MONSIEUR PROUST, a new play by Mary Zimmerman based on the writings of Celeste Albaret and Marcel Proust, at the Steppenwolf Upstairs Theatre. About Face Artistic Director Eric Rosen will direct. The season concludes with the culmination of the About Face Youth Theatre’s two-year investigation into home and homelessness in Chicago’s youth community, THE HOME PROJECT. Dates and location for THE HOME PROJECT will be announced at a later date.

In addition to these mainstage productions, About Face will announce artists, projects, and dates for the continuation of its ambitious New Work program in the coming months. Artists who have collaborated in About Face’s past new works programs include Moises Kaufman, Doug Wright, Sarah Ruhl, Jessica Thebus, Patricia Kane, Kyle Hall, Eric Rosen, Andre Pluess and Ben Sussman, cin salach, among many others. About Face has premiered nearly 30 original works over the past ten years, and is known nationally for its record of success in providing meaningful development and production opportunities for playwrights and directors.

About Face Theatre creates exceptional, innovative, and adventurous plays to advance the national dialogue on gender and sexual identity, and to challenge and entertain audiences in Chicago, across the country, and around the world. Currently celebrating its 10th anniversary, About Face has developed and produced over 30 new productions for Chicago audiences, including 23 world premieres, by emerging and national-level theatre artists. Plays developed by About Face have been seen across the country to critical acclaim, and have been awarded with the Jeff Award, After Dark Award, the Pulitzer Prize for Drama, and the Tony Award for Best Play. About Face has been recognized through the Human First Award, the GLSEN Pathfinder Award, and induction into the Chicago Gay and Lesbian Hall of Fame.

About Face Theatre's 2005-06 season is sponsored in part by: a Grant from the Illinois Humanities Council, the National Endowment for the Humanities, and the Illinois General Assembly; Illinois Arts Council, a state agency; The National Endowment for the Arts; The Alphawood Foundation; The Chicago Community Trust; The Young Leaders Fund at The Chicago Community Trust; Girls Best Friend Foundation; The Mayer and Morris Kaplan Family Foundation; Jean and Jordan Nerenberg Fund for the Future; The MacArthur Fund for Arts and Culture at Prince; Polk Bros. Foundation; and The Shubert Foundation.

ABOUT FACE YOUTH THEATRE: 2006
THE HOME PROJECT
A new play created by AFT Artistic Associate Megan Carney and the About Face Youth Theatre ensemble.
WORLD PREMIERE
Dates and location to be announced at a later date