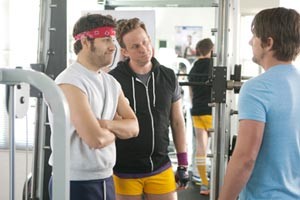 Los Angeles, CA - Outfest 2012, the 30th Los Angeles Gay & Lesbian Film Festival, has announced that it will screen a never-before-broadcast episode of ABC's hit comedy show "Happy Endings." Following the screening, members of the cast and creating team will take part in a Q&A, including cast members Adam Pally (Max), Casey Wilson (Penny), Stephen Guarino (Derrick), as well as creator and executive producer David Caspe and executive producer Jonathan Groff. The panel and screening will take place on Saturday, July 22 at 1:00pm at the Director's Guild of America (DGA 1).

Also added to this year's program is a special screening of Eytan Fox's acclaimed Israeli film, "Yossi." In "Yossi," the sequel to the international hit "Yossi and Jagger," Dr. Yossi Hoffman has become a valued and dedicated cardiologist, often using his work as a way to escape from dealing with his life. He lives alone, unable to break through the walls and defenses built around him since the death of his lover. His daily routine at the hospital is shaken up by the arrival of a mysterious woman whom he follows to the southern city of Eilat. Surrounded by sea and sand dunes, he meets Tom, a handsome, self-confident, openly gay man, who represents a new world, different from the one that shaped Yossi.

The John Anson Ford Amphitheatre will once again provide the setting as LA's most epic yet intimate outdoor venue for the festival's Under the Stars screening series, hosting the Closing Night Gala "Struck by Lightning." Other screenings include "Cloudburst," starring Olympia Dukakis and Brenda Fricker, the world premiere of "BearCity 2: The Proposal," "I Do," and the "Hairspray" Sing-Along. This event is part of the Ford Amphitheatre 2012 Season, a multi-disciplinary arts series produced by the Los Angeles County Arts Commission in cooperation with Los Angeles County-based arts organizations. For a complete season schedule, directions to the theater and parking information, log on to www.FordTheatres.org.