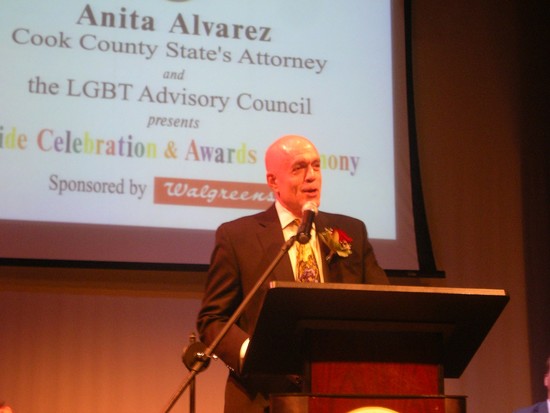 Alvarez (D) honored two longtime activists at the event -- Ill. state Rep. Greg Harris (D-Chicago), who's sponsoring legislation to allow gays and lesbians to marry in Illinois, and Mona Noriega, Commissioner of the Chicago Department of Human Relations, who in 1993 co-founded the Midwest office of Lambda Legal, the LGBT legal group that filed a lawsuit in Cook County Circuit Court last month to overturn Illinois' ban on marriage for gay and lesbian couples.

At the event, Alvarez talked about her decision, announced shortly after the Lambda Legal lawsuit was filed, to not defend the state's marriage ban.

"Some have suggested I did it over the objections of some in my office or for political purposes," Alvarez said. "The truth is this was a no-brainer."

Alvarez said every staff member in her office agreed with the decision.

"It was unanimous," Alvarez said. "It's the correct decision. It was the humane decision."

In comments at a reception before the awards ceremony, Alvarez said she's not surprised to hear that anti-gay groups are looking for ways to intervene in the lawsuit in the wake of her decision and the announcement by Ill. Attorney General Lisa Madigan (D) that she also has determined that the state's ban against gay and lesbian couples marrying is unconstitutional.

"We put our decision out there," Alvarez said. "I figure there's a lot of groups out there trying to get groups to try to intervene. But we're not changing our position."

After receiving the Pride Community Service Award from Alvarez, Harris praised her support for marriage equality.

"It's not easy," Harris said. "You can be right. You can have the law, you can have fairness on your side. But if you don't have courage, it doesn't matter."

He said decisions such as the one made by Alvarez should give LGBTs ample motivation to vote.

"We have got to support our elected officials," Harris said. "We've got to be sure that we go to the polls...and return people to office who will do the right thing for us."

Noriega, who in addition to her groundbreaking work for Lambda Legal also co-founded Amigas Latinas and has worked on immigrant rights and LGBT aging issues, marveled at the progress that's been made on LGBT equality.

"Can I say, 'Oh, my god, we've come such a long way?'" Noriega said. "But you know what follows: We have such a long way to go. ...We're asking now for equality in every facet of our lives."

Like Harris, she urged LGBTs to get involved in the community and to vote.

"What I would say to you today is to be civilly engaged," Noriega said. "Stand up for those who stand up for you."

Alvarez and her LGBT advisory council also recognized Andria Perez, a second-year law student at Loyola University Chicago School of Law. Jeremy Gottschalk, president of the Lesbian and Gay Bar Association of Chicago, presented Perez with a scholarship on behalf of Alvarez.

WGN TV and radio personality Dean Richards emceed the event, which was sponsored by Walgreens.

State Rep. Greg Harris will be a guest on Critical Thinking hosted by Waymon Hudson when it premieres on Gay Chicago TV on June 28th at 8pm, with new episodes added every 2nd and 4th Thursday of the month.