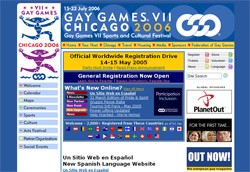 Illinois Family Institute comes against companies "sponsoring this immoral event, and those that are helping to celebrate sexual misbehavior in general."

Chicago, IL - The American Family Assn., which regularly does battle against what it calls the “radical homosexual agenda,” is urging its members to protest Kraft Foods' support for the 2006 Gay Games in Chicago.

AFA sent an e-mail to members on Monday that read: “Kraft Foods, makers of popular products like Macaroni and Cheese, Kraft Singles, Oreo cookies, Maxwell House coffee, and Ritz Crackers is a sponsor of the 2006 Gay Olympic Games in Chicago.

“In addition, Kraft has authorized its company logo to be placed on the gay games official website as a major corporate sponsor.

“The gay games are supported and endorsed by dozens of homosexual activist groups and organizations, including homosexual magazines and television outlets.

“Tell Kraft to drop their corporate sponsorship of the 2006 Gay Games in Chicago. Take Action. Kraft is ignoring emails. Please make a personal phone call to Kraft and tell them to pull their financial support from the 2006 Gay Games.”

"We are not calling for an official boycott," AFA director of media and public relations Kathryn Hooks said in a statement to Outsports. "We believe many of Kraft's customers would be offended to know a portion of their finances from Kraft purchases is being used to support something they oppose, and we also believe Kraft corporation would want to hear from its customers."

AFA, based in Tupelo, Miss., and headed by the Rev. Donald E. Wildmon, has long been opposed to gay rights and what it terms the negative impact the entertainment media has on “traditional family values.” The group, which claims more than 500,000 members and had an estimated budget in 2000 of $11.4 million, is perhaps best known for urging a boycott of Disney for its support of gay rights. It regularly calls on companies to stop advertising on shows like “South Park” and Desperate Housewives.”

On Wednesday, the anti-gay Illinois Family Institute asked its members to target Kraft and five other Illinois companies that are sponsoring what it calls the "Homosexuality Games." "By allowing their corporate logos to be used to promote the 'Gay Games,' Kraft, Harris Bank and other sponsoring companies are celebrating wrong and destructive behaviors, and showing their disdain for the majority of Americans who favor traditional morality and marriage," the group wrote on its website.

Kraft, headquartered in suburban Chicago, is a business sponsor of the Gay Games, set for July 15-22, 2006, and will also sponsor the swimming events, said Kevin G. Boyer, a spokesman for Chicago 2006.

“I’m absolutely confident of Kraft’s support of the Gay Games,” said Boyer, who was aware of the AFA’s call to action. The company has been “very supportive” of the event. Boyer said, communicating its decision to sponsor the Games to its employees worldwide. Kraft is one of 70 sponsors to date for the Games, held every four years. More than 30 sports are offered at the Games, which are open to anyone.

Representatives from Kraft did not return calls seeking comment. The Gay Games have broad public and political support in Chicago, including that of the mayor, Richard M. Daley.

"Mayor Daley is Honorary Chair of the 2006 Gay Games, and the City of Chicago is a key strategic partner with Chicago Games in hosting the Games," said Bill Greaves, the City of Chicago's liaison to the lesbian, gay, bisexual, and transgender communities. "We applaud the businesses that are sponsors of the Gay Games, including Kraft Foods.

"Mayor Daley is committed to the success of the 2006 Gay Games because it is an expression of international good will and a celebration of the lesbian, gay, bisexual and transgender communities, which are important to Chicago. ... It is estimated that the Gay Games will have an $80 million impact on our local economy."

AFA is pushing its opposition to Kraft’s action on two affiliated websites, One Million Moms and One Million Dads. An automated e-mail program allows users to send the following message to Kraft chairman Roger K. Deromedi:

“I was shocked to learn from OneMillionMoms.com that Kraft is a major corporate sponsor of the 2006 Olympic Gay Games in Chicago. As a consumer of many of your products, I strongly ask you to reconsider your financial support of this event. Your response to my concerns will determine my decision to purchase, or not purchase, your products in the future.”

Both the AFA in its e-mail and Chicago 2006 on its home page are linking to Kraft's comment page on its website. Chicago is asking that people express support for Kraft's Gay Games sponsorship.

It is hard to measure how effective consumer boycotts have been. Kraft, for example, makes Jello, Oreos, Oscar Meyer meats, macaroni and cheese, Digorno pizza, Cool Whip, Balance bars and Post cereals, among hundreds of other foods. It would seem only vegans or raw-fooders might be able to successfully avoid any of the company’s products. The Wall Street Journal, though, noted this about AFA's boycott of Proctor & Gamble after that company backed gay rights legislation in Cincinnati:

"P&G officials won't talk publicly about the boycott," the Journal's Alan Murray wrote. "But privately, they acknowledge the groups turned out to be larger, better funded, better organized and more sophisticated than the company had imagined. And there is little doubt the boycott hit its mark. Tim Wildmon, president of the American Family Association, says 360,000 families signed petitions to boycott P&G products. Subsequently, P&G's advertising disappeared from gay magazines and Web sites and gay-oriented television shows."

Threats against companies that support gay and lesbian causes are not to be taken lightly in the current cultural climate. Microsoft came under intense scrutiny last month when it dropped its support for a gay rights bill in the state of Washington after a local anti-gay minister threatened a boycott. The bill lost by one vote and the company last week announced it would support a similar measure in the future.

Editor's Note: ChicagoPride.com is a proud sponsor of the 2006 Gay Games in Chicago. We encourage you to support Kraft Foods and the additional sponsors of this important event.