The Abbey could open by end of year on Halsted 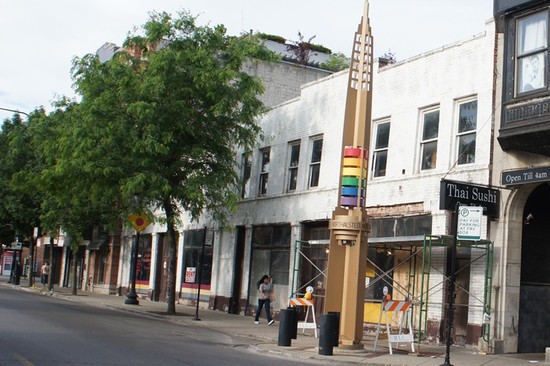 garage on north halsted could be transformed into the abbey

Garage on North Halsted could be transformed into The Abbey, Boystown

Chicago, IL - There's a buzz on Boystown's North Halsted Street and it's emanating all the way from one of West Hollywood's most iconic gay nightspots.

Long an eyesore in the middle of Boystown, the former auto repair shop at 3532 N. Halsted Street, used mostly for parking cars during Cubs games, could be transformed into the newest outpost of The Abbey as soon as December if all goes according to plan.

The Abbey Food & Bar is the hottest gay club in Los Angeles' West Hollywood gayborhood. Opened by David Cooley in 1991, it's expanded over the years from an 1,100 square-foot coffehouse into a 16,000 square-foot restaurant, open-air patio and dance bar. Reviewers routinely gush over its unique décor and ambiance.

A spokesman for The Abbey refused May 30 to confirm the plan to open in Boystown, saying, "We haven't announced any plans for expansion in Chicago," adding that Cooley and the club's partner, sbe Entertainment Group, have looked "at multiple locations in many cities" as possible targets for expansion.

But ChicagoPride.com has confirmed that a local businesswoman, Wendy Berger Shapiro, is under contract to purchase the 12,100 square-foot building at 3532 N. Halsted and that meetings have already been held with city officials and neighborhood groups, including Triangle Neighbors and the Northalsted Business Alliance, to discuss plans for The Abbey. Shapiro confirmed the contract but also noted that the purchase has not been finalized.

Zoning regulations for the site will have to be changed to accommodate the nightclub, something Ald. Tom Tunney (44th) is willing to work with neighbors, Shapiro and The Abbey to effect. As a former auto repair shop, the building may also need considerable clean-up work to address environmental concerns.

The opening of The Abbey at the location would add another decidedly gay presence to the block. Cooley has been heavily involved in supporting gay and HIV/AIDS causes in Los Angeles and recently attracted national attention when he announced that The Abbey would no longer host "Bachelorette parties" and that the ban would remain in effect until gays and lesbians are allowed to marry.

Cooley said he decided to take the action in the wake of North Carolina's recent move to institute a constitutional ban on marriage equality for gays and lesbians.

"Every Friday and Saturday night, we're flooded with requests from straight girls in penis hats who want to ogle our gogos, dance with the gays and celebrate their pending nuptials. They are completely unaware that the people around them are legally prohibited from getting married," Cooley said in a press release about the ban. "Over the past 22 years, The Abbey has been a place that accepts everyone, gay, straight, lesbian, transgender, bisexual and everything in between. We love our straight girlfriends and they are welcome here, just not for bachelorette parties. It has long been a policy at The Abbey to deny admission to groups in costume, including Bachelorette regalia. Bachelorette parties had previously been allowed inside if they removed their costumes. The Abbey's Bachelorette Ban comes on the heels of a ban on gay marriage in North Carolina and a number of other states across the south. The Abbey encourages other gay-owned and -operated establishments to institute their own bans as a sign of solidarity until marriage is legal everywhere for everyone."