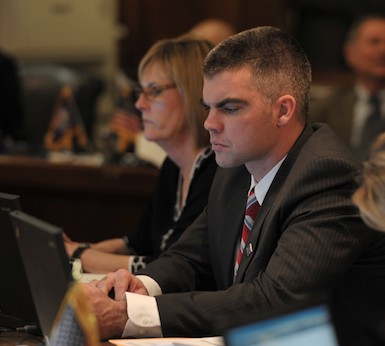 Fort Wayne, IN - An Indiana lawmaker is the only member of the Legislature refusing to sign a resolution celebrating the Girl Scouts of America's 100th anniversary.

Morris stated his position in a letter.

He alleged the youth group is a "tactical arm of Planned Parenthood" and that many parents are "abandoning the Girl Scouts because they promote homosexual lifestyles."

Morris said in a Girl Scouts study of 50 role model, "only three have a briefly-mentioned religious background – all the rest are feminists, lesbians or Communists."

He referred to a World Net Daily article that said troops are not allowed to pray or sing traditional Christmas Carols.

And, referring to a recent controversy in Colorado, complained that "boys who decide to claim a ‘transgender' or cross-dressing life-style are permitted to become a member of a Girl Scout troop, performing crafts with the girls and participate in overnight and camping activities – just like any real girl."

Morris also complained that first lady Michelle Obama is an honorary leader of the organization and that the Obamas "are radically pro-abortion and vigorously support the agenda of Planned Parenthood, should give each of us reason to pause before our individual or collective endorsement of the organization."

Representatives responded in defense of the resolution and the Girl Scouts.

Rep. Kathy Richardson, R-Noblesville, told the Journal Gazette, "I guess he's entitled to his opinion. They are out selling cookies – not sex and abortions."

"I guess he's entitled to his opinion," she said. "They are out selling cookies – not sex and abortions."

The Girl Scouts of Northern Indiana Michigan posted on its Website a statement of "What We Stand For" that addresses some of Morris' claims.

The organization's mission is to help build girls of "courage, confidence and character who make the world a better place."

Neither the Northern Indiana Michigan organization or the Girl Scouts of the United States of America has a relationship with Planned Parenthood, which provides health services to women.

And, the statement read, the scouts' position is that issues related to human sexuality and reproductive health are best left to parents or guardians and their daughters.

In regards to transgender youth, the statement says those issues are addressed on a case-by-case basis, with the "welfare and best interests of the child and the members of the … troop … a troop priority."