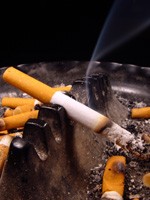 Rancho Mirage, CA - The percentage of young gays and lesbians who smoke is nearly double the national average among teens.

The findings were presented Monday at the Gay and Lesbian Medical Association's annual conference in Rancho Mirage, California.

While smoking has been identified as the single most preventable cause of death and disease in the world, surveys have consistently found that LGBT people smoke at rates at least 40 to 60 percent higher than the general population.

The new research included national data specific to adolescents with same-sex attractions or behaviors as well as results from a GLMA survey of LGBT health care providers about smoking and patient counseling practices.

It was prepared by the National Longitudinal Study of Adolescent Health (Add Health) and analyzed by Alyssa Easton, PhD, MPH of the Centers for Disease Control and Prevention and Randall Sell, ScD of Columbia University.

“As a pediatrician and as president of GLMA, I am deeply concerned about the Add Health Study findings,” said Kenneth Haller, MD.

“The time is now to take action to prevent more LGBT youth from initiating smoking, and to help LGBT youth and adult smokers to quit,” Haller said.

In addition, a GLMA Health Care Provider Survey - developed in conjunction with the Centers for Disease Control and Prevention Office on Smoking and Health - assessed cessation counseling practices and smoking behaviors among GLMA members and other health care providers, the overwhelming majority of whom were LGB or T.

A majority of respondents, however, do ask their patients about smoking and do provide at least 5-10 minutes of counseling to patients. Of those who do not regularly counsel, 61.3% said they would be more likely to counsel LGBT patients if there were LGBT-specific smoking cessation materials available.

In addition to recommending development of LGBT-specific cessation materials and approaches, a majority of respondents expressed a need for LGBT-tailored ad campaigns and training for health care providers in cessation counseling in order to more effectively LGBT smoking.

“As research continues to point to high smoking rates among LGBT populations—especially disproportionate among adolescents—it is important to continue these types of surveillance efforts and support programs to help reverse these trends,” said Easton.

Smoking kills over 440,000 people each year in the United States, and health care providers have an important role to play in promoting smoking cessation. GLMA is in an ideal position and has the skills to help reduce smoking-related morbidity and mortality among LGBT and all communities.”

This article originally appeared on 365gay.com. Republished with permission.