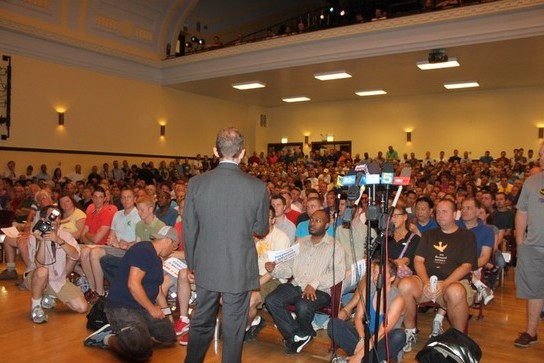 alderman tunney addressed the crowd at a packed caps meeting

Part two of a special two-part year in review

Chicago, IL - 2011 marked an eventful year for Chicago's LGBT communities. From the start of the year, when queer Chicagoans played an active role in the lead-up to the city's much-anticipated mayoral election to the end, as same-sex couples throughout the state marked the six-month anniversary of the legalization of civil unions in Illinois, the community celebrated many highs.

And though the year was also not lacking for low points, one thing was consistent across the good and the bad of LGBT Chicago's 2011: The Windy City is home to some of the most passionate, hard-working and innovative lesbian, gay, bisexual and transgender minds in the country and this year in particular proved that not even deeply hurtful words and actions of the community's adversaries can prevent them from leaving an incredible impact on the neighborhoods, city, nation and world they call home.

Continuing where we left off in part one, which featured stories from the first half of 2011, below is the final chapter of the 11 biggest news stories of the year. (Read Part 1)

'Taking back' Boystown
In early July, a video recording-gone-viral showing a late night stabbing in the heart of the city's Boystown neighborhood ignited a searing debate amongst the city's LGBT communities. The video, which showed a 25-year-old man being punched, kicked and stabbed by a group of almost a dozen youth prompted some in the community, largely centered around a Facebook group called "Taking Back Boystown," to criticize the amount of crime in the area and accuse area service providers for attracting individuals who caused problems.

Those accusations angered some LGBT groups who accused some particularly vocal Lakeview residents of being racist in their criticisms. The debate hit its peak at a July CAPS meeting.

Catholic controversy
In a development perhaps unexpected by the state's Catholic leadership, Illinois chose, in July, to cease its foster care and adoptions services contracts with Catholic Charities. The charities had refused to recognize couples in civil unions as prospective foster or adoptive parents and the state ruled that this action did not comply with the civil union law as it was written. Though Catholic Charities initially filed a lawsuit in an attempt to keep the contracts, the impacted dioceses dropped their lawsuit in November.

The Catholic Charities dustup was far from the only clash Catholic leadership in Illinois had with LGBT leaders. In September, the Catholic Conference of Illinois launched a "defense of marriage" department in an attempt to fight "an uphill battle against current societal trends" and stave off marriage equality from coming to the land of Lincoln. Chicago Archbishop Cardinal Francis George also came under fire from LGBT advocates in December when he compared the LGBT rights movement to "something like the Ku Klux Klan" in an interview on Fox Chicago. Though many have called for him to step down because of the contentious statement, George has stood by it.

Meanwhile, just over 5,000 people have signed onto a Change.org petition calling for Cardinal George's resignation.

Tragedy in Indianapolis
Christina Santiago, 29, the programming manager for the Howard Brown Health Center's Lesbian Community Care Project, was killed Saturday, Aug. 13, along with six others after a grandstand stage collapsed at the Indiana State Fair, just before the band Sugarland was to perform. Santiago was described as "a leading and driving force in the expansion of our women's health services division and a powerful advocate for all LGBT women" by Howard Brown President Jamal M. Edwards.

Alisha Brennon, Santiago's partner, survived the collapse and filed a wrongful death lawsuit. Though there was some question whether the state of Indiana, which does not recognize same-sex partnerships, would deem Brennon eligible to seek compensation in her partner's death, the state essentially recognized their Illinois civil union by granting that she controlled her partner's estate. She, along with the families of the six other victims, accepted a settlement in the case earlier this month.

Gay Chicago folds
Effective late September, Gay Chicago ceased publication, leaving Windy City Times as the city's only LBGT newsweekly. The paper, following in the footsteps of the also now-defunct Chicago Free Press, had initially stated that they would be switching to a biweekly publishing schedule. The Chicago Reader's Michael Miner addressed the paper's shuttering in a November column.

Here's Rosie!
On the entertainment front, with her move to the Windy City for tapings of her new talk show, "The Rosie Show," on the Oprah Winfrey Network, Rosie O'Donnell became one of the city's highest profile LGBTs-in-residence. O'Donnell bought a home in Lakeview and is filming her show at Harpo Studios, formerly home to Winfrey's show.

Of course, many other LGBTs and gay favorites passed through town in 2011, including Glee's Darren Criss, who headlined this year's Northalsted Market Days. Talented names in the sporting arena also came to Chicago this year during the 35th Annual Gay Softball World Series. The event attracted thousands of softball players from across the North American continent to the city. The city also hosted a number of the best out filmmakers during the 30th annual offering of the Reeling Lesbian & Gay International Film Festival in November. One of the festival's standout films, "The Wise Kids," was crafted by Chicago filmmaker Stephen Cone.

In remembrance
Santiago, mentioned above, was far from the only well-known LGBT advocate the city of Chicago lost this year. 2011 also marked the death of Roger "RJ" Chaffin, a prominent gay businessman; Lois Bates, a pioneering trans activist who co-founded the Chicago Transgender Coalition; Paul Varnell, a local journalist who wrote for several LGBT publications; Iftikhar "Ifti" Nasim, a Pakistani-born gay activist and many others. Windy City Times has a more complete list of those who passed away this year.

Click here to revisit some of the city's top LGBT headlines from the first half of 2011.

Joseph Erbentraut is the associate Chicago editor of The Huffington Post. His work has been featured in the Village Voice, ChicagoPride.com, the Windy City Times, Chicagoist, Gapers Block and other publications.