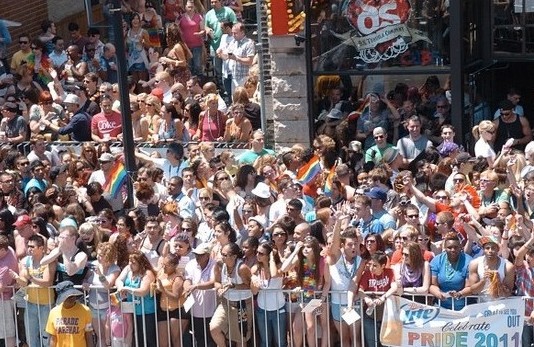 Chicago, IL - Organizers of the annual Gay Pride Parade have reached a compromise with parishioners and leaders of Our Lady of Mount Carmel, who were concerned the parade's new route and start time would conflict with morning mass.

Alderman Tom Tunney (44th Ward) and organizer Richard Pfeiffer meet with church representatives last week to discuss the parish's concerns about the route and proposed start time of 10 a.m., which is one hour before the church's morning mass.

As Chicago's first openly gay alderman and a member of Our Lady of Mount Carmel, Tunney was caught in the middle.

Now parade organizers say the 2012 parade will be pushed back to Noon - the previous start time - to help accommodate Sunday services along the parade route.

"After consulting with the various City departments, we believe this is an agreeable compromise to help keep the parade safe and manageable while respecting the diversity of our neighborhood," Tunney and Pfeiffer said in a joint statement.

In October the City of Chicago made significant changes to the annual parade including a new route and start time, which was to help curtail public drinking.

The new route calls for the parade to travel east down Belmont from Halsted to Broadway, taking it directly in front of Our Lady of Mount Carmel Church, one of the city's oldest Roman Catholic churches.

The change in route and time came after last year's parade drew nearly 800,000 people to the neighborhood leading to crowd control problems for the city.

On Wednesday, Cardinal Francis George said he supported the priest's objection to the parade start time.

"Well, I go with the pastor. I mean, he's telling us that they won't be able to have church services on Sunday, if that's the case," Cardinal George told Fox Chicago. "You know, you don't want the Gay Liberation Movement to morph into something like the Ku Klux Klan, demonstrating in the streets against Catholicism."

Pfieffer, who has organized the parade for the past 40 years, said that public safety is the bottom line in these decision.