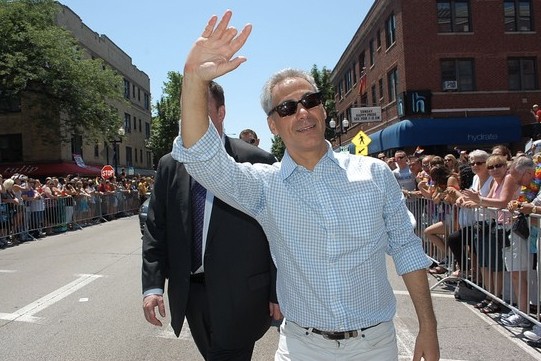 photo credit // anthony meade
Chicago, IL - Cardinal Francis George said Wednesday during a taping of Fox Chicago Sunday that some gay rights activists use anti-Catholic rhetoric that reminds him of the Ku Klux Klan. The Cardinal also said he supported a North Side priest in objecting to the new route for next year's Chicago Gay Pride Parade.

"Well, I go with the pastor. I mean, he's telling us that they won't be able to have church services on Sunday, if that's the case," Cardinal George said. "You know, you don't want the Gay Liberation Movement to morph into something like the Ku Klux Klan, demonstrating in the streets against Catholicism."

When questioned about the statement, Cardinal George said, "The rhetoric of the Ku Klux Klan, the rhetoric of some in the Gay Liberation. Who is the enemy? The Catholic Church."

The controversial new route calls for the Pride Parade to travel east down Belmont from Halsted to Broadway, taking it directly in front of Our Lady of Mount Carmel Church, one of the city's oldest Roman Catholic churches.

Church leaders say the plan will interfere with it's Sunday Mass, possibly causing it to cancel morning mass for the first time in 125 years.

The change in route and time came after last year's parade drew nearly 800,000 people, which lead to crowd control problems for the city.

A number of LGBT advocates and allies are speaking about the Cardinal's statements.

"The Cardinals unfortunate choice of words in comparing the LGBT community to the Klu Klux Klan is offensive," State Rep. Sara Feigenholtz (D-Chicago) told ChicagoPride.com late Wednesday. "I would hope an apology be forthcoming."

"I think the Cardinal's remarks were inappropriate and disrespectful. We should always treat each other with respect, even when we disagree," said openly-gay State Rep. Greg Harris (D-Chicago), whose district also includes the parade route.

The Gay Liberation Network, an LGBT gay rights advocacy group headed by Andy Thayer, issued the following statement: "In comparing LGBT rights advocates to the KKK, the Cardinal shows he is not honest man of faith trying to better the world, but rather, a mendacious one trying to deflect criticism of church policies that promote discrimination. It is ironic that George chooses to mention the KKK, as they are but one of the most extreme examples of organizations which have used religion to shield themselves from criticism of their hateful policies. While an overwhelming majority of lay Catholics support equality for women and LGBTs, the Catholic leadership has a history and present practice of discrimination which they apparently will go to quite extreme lengths to defend."

Fox Chicago Sunday will air Christmas morning at 8:30 a.m. The entire interview with the Cardinal is currently posted on the Fox Chicago website at MyFoxChicago.com.