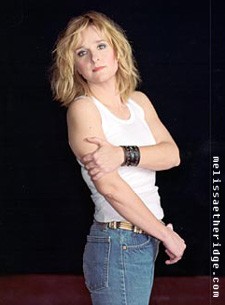 In a media statement, the singer's publicist said that the 43 year old singer will begin immediate treatment.

"A speedy and complete recovery" is expected by her doctor, publicist Marcel Pariseau said in a statement.

The cancer was detected early and Etheridge has been receiving treatment, Pariseau said.

"I am fortunate to be under a wonderful doctor's care and thankful that this was caught early," Etheridge said in the statement. "I am looking forward to a quick and full recovery."

Before meeting Michaels, the two time Grammy winner shared her life for 12 years with Julie Cypher. They went on to have two children together, Bailey and Becket, each carried by Cypher with singer David Crosby contributing his sperm. Etheridge and Cypher split up in 2000 but continue to share custody of their children.

Michaels, 28, is best known for playing high-maintenance princess Nicole Julian on the defunct WB series Popular. She had a recurring role in Showtime's lesbian drama series The L Word and appeared in the film D.E.B.S

Etheridge's latest album, "Lucky," was released in February. Last month it was announced she would star in an as yet unnamed sitcom for ABC.

The singer will play a lesbian music teacher who lives with her best friend, a straight man. The two are raising the daughter of another friend.

The project is being readied by 20th Century Fox TV and produced by Brad Grey TV which describes it as a reversal of "Will & Grace" with a kid.

It is unclear what impact her treatment will have on the production.

Etheridge had been scheduled to play 11 dates in seven cities this month. Refunds for tickets to her upcoming shows will be available where they were bought Pariseau said.

Editor's Note: Melissa Etheridge signed on as a Gay Games Ambassador in August, joining a growing list of athletes, artists, activists and celebrities supporting the movement in advance of Gay Games VII, scheduled for 15-22 July 2006 in Chicago. (story)

Related: All articles about Melissa Etheridge

This article originally appeared on 365gay.com. Republished with permission.