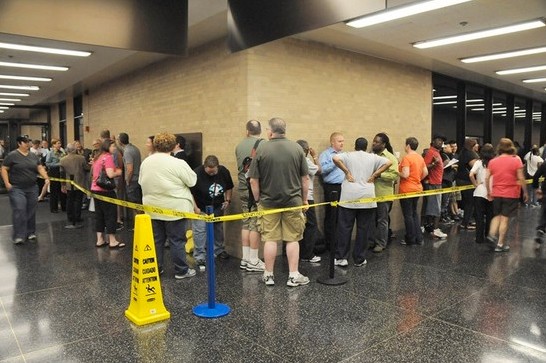 photo credit // frank failing
Chicago, IL - Opposite-sex couples who have obtained civil unions in Cook County cite fairness or "solidarity with the gay community" as the number one reason to choose a civil union over marriage, according to a survey released Tuesday.

"Some heterosexual couples are clearly making a statement when they are civilly united rather than married," Cook County Clerk David Orr said. "One respondent put it best when she said this decision was in solidarity with the gay community until they also have the option of getting married."

The survey conducted by Orr's office show twelve of 46 respondents, or 26 percent, cited political or ideological reasons such as equality and inclusiveness when asked why they opted for a civil union when they could legally marry. Obtaining benefits was the second most common answer, volunteered by nine of 46 -- or 20 percent of -- respondents.

An unpaid student intern working for the Clerk's office conducted the telephone survey in September to explore why opposite-sex couples, who could legally marry, would choose a civil union over marriage.

"The fact that over one in four opposite-sex couples in Cook County chose to obtain a civil union over marriage out of solidarity with their LGBT friends, family, and neighbors tells so much about how far we have come," Randy Hannig, Director of Public Policy at Equality Illinois, said. "We hope that these statistics hold true in other parts of the country and set a precedent for our straight allies to stand up for the gay community until we achieve full marriage equality.

In the first six months of civil unions, from June 1 to Nov. 30, the Cook County Clerk's office issued 1,856 civil union licenses. Of those, 138 licenses were issued to opposite-sex couples.

As ChicagoPride.com reported earlier this month, more than 3,700 Illinois couples statewide have applied for civil union licenses during the six month period since the state began offering the option.

Full survey results can be found in the report "Opposite-Sex Civil Unions: Motives for Not Marrying."