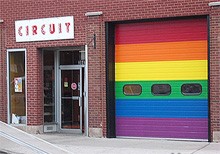 Chicago, IL - Circuit Nightclub and Rehab located at 3641 N. Halsted Street will be temporarily closed for the completion of some necessary renovations and re-decorating. The popular gay dance club is working in conjunction with the City of Chicago, Department of Buildings, to expedite this process and to minimize any inconvenience to their staff and patrons. Plans are to reopen this fall.

In a statement released to ChicagoPride.com, co-owners Mike Macharello and Patrick Harms made it clear the temporary closing is unrelated to the “vote dry” issue.

On August 3, 2004, enough signatures were submitted to the Chicago Clerk’s office to place a “dry vote” proposition on the November 2 ballot. The proposition will allow area residents to vote the precinct fully dry, which could effectively shut Circuit down.

"The proposed move could change the character of this area forever," Alderman Tom Tunney wrote in a July letter opposing the initiative.

The battle started over three years ago when the condo development Dakota, 3631 N. Halsted St., was built next door to Circuit on the commercial Halsted St. strip. Although Circuit was there long before the Dakota, the new residents began complaining almost immediately about the neighborhood noise. In response to those complaints, Circuit's owners have spent almost $200,000 reinforcing the club's soundproofing. While most Dakota residents have said that has solved the noise problem, residents Evelyn and Tom DiLisio have mounted an ongoing campaign against Circuit, most-recently gathering the signatures for the “dry vote.”

"These people are trying to destroy the unique and special character of the neighborhood," Rick Garcia, director of the gay-rights advocacy group Equity Illinois, told the Chicago Tribune earlier this month.

"We want to especially thank everyone that has supported us during our difficulties with some of our Dakota neighbors. Now that the major soundproofing has been completed, we will focus on rebuilding a quality entertainment complex we can all be proud of," said Macharello and Harms.

As part of the renovation announcement from Circuit came some exciting changes with the release of "Circuit/Rehab. version 2.0" coming in early fall.

Club goers are encouraged to check the club's website at http://www.circuitclub.com for temporary relocation of the weekly Latin nights. Special events may be relocated or rescheduled until after Circuit's re-opening.