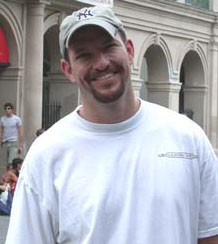 photo credit // wikipedia.org
San Francisco - The gay rainbow flag flew at half-mast on Sunday in San Francisco's Castro District, in honor of Mark Bingham, one of the many passengers on board Flight 93 who fought back against the terrorists and forced the plane to crash into a field.

His mother, Alice Hoagland, still grieves for her only son, who was 31 when he died that day.

He called her from the plane to let her know that something was terribly wrong, but that he and the passengers were going to fight.

"'Mom, this is Mark. I just want to tell you that I love you. I'm on a flight from Newark to San Francisco and there are three guys on board who have taken over the plane and they say they have a bomb,'" Hoagland remembers.

Hoagland told Patch.com that she had no qualms about telling the San Francisco Chronicle on Sept. 11, 2001, that her son was gay.

"Ten years on, I'm so glad I did and I'm so glad that Mark had the confidence and love for me that he wanted me to know something very important about himself."

Forty passengers and crew were killed when the plane crashed into the field in Shanksville, Penn.

Bingham graduated from the University of California-Berkeley with a degree in international studies. He helped lead their rugby team to numerous championships. When he died, he was working in public relations.

He was survived by his partner of six years, Paul Holm.