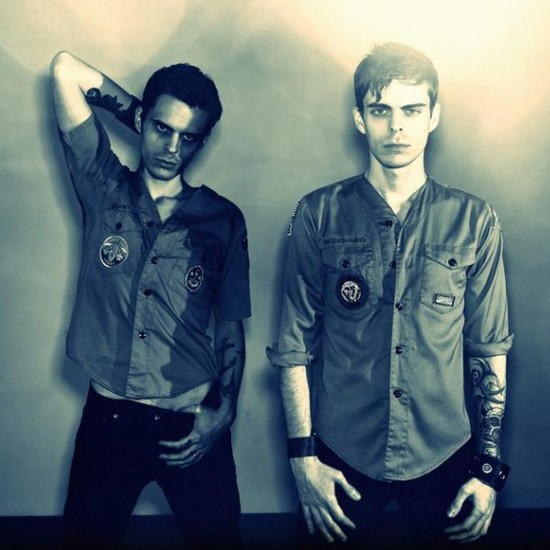 New York City - Jackson and Coleman Vrana -­- of the angst-­-ridden, twin gay brother rap band, Elephant -­- announced today the release of their next single, "Queer Nation". A call-­-to-­-arms for gay youth to claim their rightful place in pop culture, the song is the band's first single since signing to record label, Scruffy Records. A full-­-length album is scheduled for release this winter. "Queer Nation" by Elephant is available now through over 400 digital outlets, including i-­-tunes, Amazon, Napster, Emusic, Sprint, Verizon, and Zune.

"Queer Nation takes aim against the rampant homophobia that remains prevalent in hip hop today," explained Coleman Vrana, from the band's recording studio in Los Angeles. "Jackson and I decided it was time we emasculate those anti-­-gay rappers spouting their lazy stereotypical hate rhymes. We're calling it a sonic castration."

Better known for their tales of rowdy bathroom stalls, heroin binges, and month-­-long hunger strikes, "Queer Nation" is Elephant's most confrontational track to date. Some say it borders on activism. Elephant calls it their most honest work.

"Homophobia plays a huge role in keeping anger alive in an Elephant song," continues Coleman. "But we're careful not to take ourselves too seriously. Poking fun at our lifestyle is important to make our point as impactful as possible."

Still, the twins acknowledge the pain of discrimination is real. Originally from Oklahoma, they came out when they were 14 and recall getting beaten up every day. They were called the openly "hedonistic faggots." Both of them left home when they were 18. Coleman went to New York and Jackson went to London. They lived separate lives until about four years ago when Coleman paid a visit to Jackson, who had moved to Los Angeles. While they were together in L.A. they discovered that they shared a similar perspective on life.

They say years of feeling like they couldn't survive sober – or high, for that matter -­- opened their eyes to a mindset of "not giving a f*ck" about other's opinions or judgments. Forming Elephant was their way of embracing their true identity.

"Gay people have every right to be madder than hell about the unfair treatment we still receive from a society full of bigots," they say. "For the most part, gay men are still the butts of jokes. We aim to be authentic artists that break the mold on what the world sees as cool. We call ourselves ‘queer' before we call ourselves ‘gay.'"

"In our minds, and the minds of many people we love, a Queer Nation is already emerging," continues Jackson, pointing to the growing number of teenagers taking a stand against the views of their parents and popular artists like Miley Cyrus speaking out publicly in support of queer issues. "Teen fists are getting tighter. A backlash is on the way. We can feel it."

"A Queer Nation would be a nation of equality," adds Coleman. "We're sure it would look lovely."

Of course the twins recognize the irony of recording songs in a genre of music that has historically fueled the fire of homophobia. They take a fight fire with fire mentality.

"Hip hop is arguably the most popular influence on music today," says Jackson. "But apart from a few bands, there is no great gay hip hop artist out there representing the community."

Though disco – or club music, as it is more commonly known -­- is the genre of music most often associated with the gay community, the twins say more young gay men are embracing hip hop. "Most all of my queer friends listen to hip hop or at least some bubblegum variation," says Jackson. He foresees hip hop overpowering club music in the gay scene in the very near future.

However, when listening to bands like Elephant, it's easy to notice certain elements common in traditional hip hop missing in their music. The twins don't make any mention of money, bling, or guns. Their war is not with the police but rather, intolerance.

Even the sound is different. In place of record scratching and hard pounding bass, the twins present an electro-­-based hip hop, incorporating penetrating synthetic beats with punk-­-laden melodies created from guitars and keyboards.

"The name ‘Elephant' really is about being that proverbial one in the room," explains Jackson. "Our music tackles issues and releases statements that people are still too afraid to touch, but they're issues that can no longer be ignored."

Their message may appear scary to some, but they hold firm to the belief that once fans understand the message, they'll realize there is nothing to fear.

The same is true with the twins, themselves. "We may look like hedonistic faggots," laughs Coleman, "but inside we're intelligent, friendly guys, and easier to approach than you might imagine."

Related: Elephant will premiere their new song, "Queer Nation,"
at The Satellite in Los Angeles on Sept. 11 and Mustache Mondays in LA on the 12th.