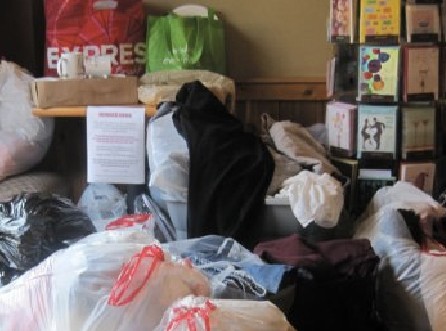 donations at caribou coffee in lakeview

photo credit // windy city times
Chicago, IL - A Caribou Coffee shop in Lakeview is collecting donations of clothing, bedding and personal items for victims of a fire that tore through an apartment building in the 800 block of West Cornelia Aug. 27.
Heather Nagey, a manager at the shop at Halsted and Aldine, said that Caribou will collect the items through the week.

"The more the better," she said, adding that leftover items will be donated to the Brown Elephant to benefit Howard Brown Health Center.

Center on Halsted will aid in the distribution of collected items. Early reports that the Salvation Army would facilitate the collection upset some people, as that organization has a history of opposing gay-rights issues. Brian Richardson, a spokesperson for the Center on Halsted, confirmed that Salvation Army was not facilitating the donation process.

Thus far, the store has collected more than 20 boxes and bags, said Nagey.

Furniture for fire victims will also be collected at Leather Sport, 3505 N. Halsted St., over the weekend, Sept. 3-4, 10 a.m.-6p.m. Fire victims are invited to come and pick up needed furniture during those times.

In the path of the fire was the office of Grab Magazine, the LGBT publication published by Stacy Bridges. Bridges published the magazine out of his home, which was destroyed.

Bridges will be working at the furniture collection throughout the weekend.

In addition, friends of Bridges have set up a Target.com registry to help him replace items lost in the fire. The registry can be found under the Target lists section on http:// www.target.com under the registry name "Stacy Bridges Fire Rescue."