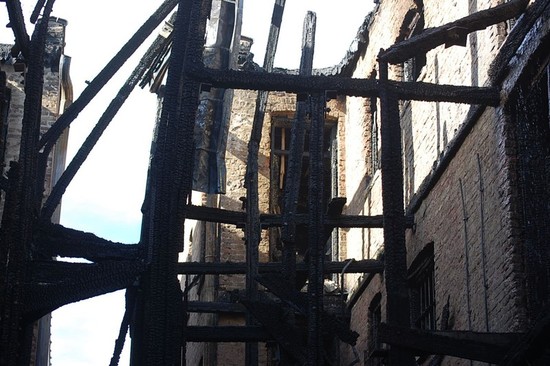 The fire was called around 2 p.m. for a 3-story u-shaped apartment building at 847 W. Cornelia. More than 100 firefighters were dispatched to the scene.

The blaze, which took firefighters more than an hour to extinguish, began on the rear porches and spread to all three floors, according to the Chicago Fire Department.

As ChicagoPride.com first reported, flames and thick black smoke could be seen for miles as the blaze erupted Saturday afternoon. The 2-11 alarm was raised to 3-11 at about 3 p.m. when the fire spread to an adjoining building.

Several onlookers, who had gathered near Cornelia and Fremont, tweeted photos they had taken with their cell phones. (Click to view photos)

Much of the damage was to the back of the buildings along the wooden stairwell and porches. At least 7 units were damaged, including the apartment of Stacy Bridges, a publisher of LGBT publication Grab Magazine.

Bridges, who operated Grab out of his home, said his computer was saved and that the publication will be out on time. Bridges' Facebook page is full of well wishes for him and everyone impacted by the fire.

One firefighter suffered a shoulder injury. There were no other injuries reported and all occupants got out safely.

The cause of the fire is under investigation.