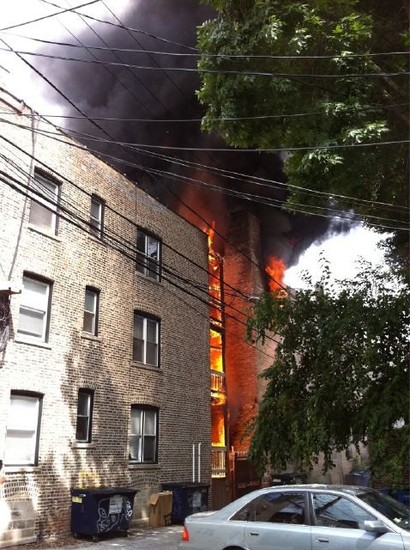 Three-story apartment building near Cornelia and Halsted erupted in flames at 2 p.m. Sat.

The extra alarm fire was called around 2 p.m. for a 3-story u-shaped apartment building at 847 W. Cornelia.

Flames and thick black smoke could be seen for miles as the blaze erupted. More than 100 firefighters were dispatched to the scene.

The blaze took firefighters more than an hour to extinguish as people gathered nearby to watch. Several onlookers tweeted photos they had taken with their cell phones (see photo inset).

ChicagoPride.com photojournalist Anthony Meade reports the fire has affected at least two buildings as flames also damaged a nearby structure.

According to Meade, most of the damage was to the back of the building along the stairwell and porches. There was damage to at least 7 units, including the apartment of Grab Magazine publisher Stacy Bridges.

One firefighter was treated for extreme heat, but there have been no additional reports of serious injuries.