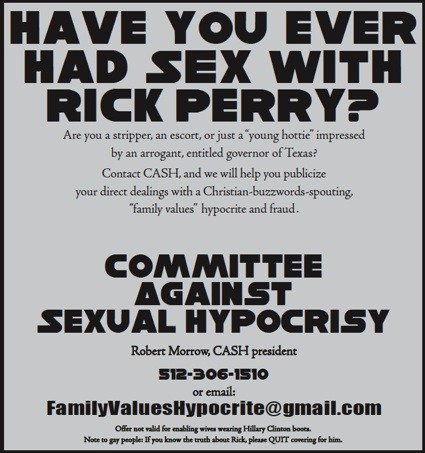 Dallas - A political ad paid for by a Republican Ron Paul supporter is offering cash to anyone (male or female) who had sex with GOP presidential candidate and Texas Gov. Rick Perry.

"Have you ever had sex with Rick Perry? Are you a stripper, an escort, or just a 'young hottie' impressed by an arrogant, entitled governor of Texas? Contact CASH, and we will help you publicize your direct dealings with a Christian-buzzwords-spouting, 'family values' hypocrite and fraud."

"CASH" is the work of Robert Morrow, and stands for Committee Against Sexual Hypocrisy.

The bottom of the ad reads: "Note to gay people: If you know the truth about Rick, please QUIT covering for him."

Perry has long been dogged by rumors that he cheats on his wife with men and women, but the Austin Chronicle, which published the ad, investigated those rumors in 2004 and could not substantiate them.

"The variations are multiple and quite inventive – we won't recount them here – but at their core is the tale that the governor's marriage is in trouble, that his wife Anita has/will/may decide to divorce him, and that the issue is Rick's alleged infidelity, with one or another member of his administration of undetermined gender," the newspaper wrote at the time.

The Chronicle also pointed out that those rumors had been investigated by other newspaper reporters as well, and nothing turned up.