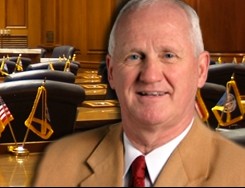 Indianapolis, IN - An Indiana Republican state lawmaker who voted for a constitutional amendment to ban gay marriage finds himself in a same-sex prostitution scandal.

Rep. Phillip Hinkle has been accused of offering to pay an 18-year-old man "for a really good time," according to an email exchange published Friday by the Indianapolis Star.

Hinkle responded to a Craigslist posting by Kameryn Gibson, which requested a "sugga daddy." Hinkle then promised cash up front, with a tip of $50 or $60 for the teen to spend time with him at an Indianapolis hotel.

"Cannot be a long time sugar daddy," the email from Hinkle's personal account reads, "but can for tonight. Would you be interested in keeping me company for a while tonight?"

According to the report, Gibson says he met Hinkle at the hotel. When he tried to leave, Hinkle told him he could not leave, grabbed him in the rear and exposed himself. Later Hinkle gave the young man an iPad, BlackBerry and $100.

Ironically, the BlackBerry Hinkle gave to Gibson was his own personal cellphone.

"I was like, ‘Your husband is gay,'" Megan said. "And then she was like, ‘You have the wrong person.'" His wife reportedly asked Megan not to call the police.

Megan says she then began to receive calls from other members of Hinkle's family, offering her $10,000 to keep quiet.

Hinkle has not contested the emails but told the Star, "I am aware of a shakedown taking place."

The 64-year-old married Republican not only opposes same-sex marriage, but approves of abstinence-only sex education and prayer in public schools.