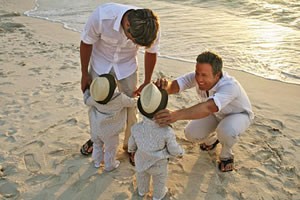 The editors of gay glossy The Advocate are turning to their readers to produce a snapshot of what it's like to be gay in America.

The magazine is asking readers to take a photograph on Friday, August 12 for consideration in its second annual A Day In Gay American photo layout to appear online and in its November issue.

"The Advocate wants a photo of your life on that single day … anything from the mundane to the insane, from the glamorous to the gritty," the magazine's editors wrote in their request for submissions.

Photos must be submitted at advocate.com/DayInGayAmerica no later than Wednesday, August 17.

The magazine says the documentary project aims to break stereotypes about what it's like to be gay, lesbian, bisexual or transgender in America today.

"Each picture serves as a reminder – to ourselves and to others – that we are undeniable, we are unique, and that no one has the right to tell us who we should love or how we should express ourselves," editors wrote in unveiling last year's published photographs.