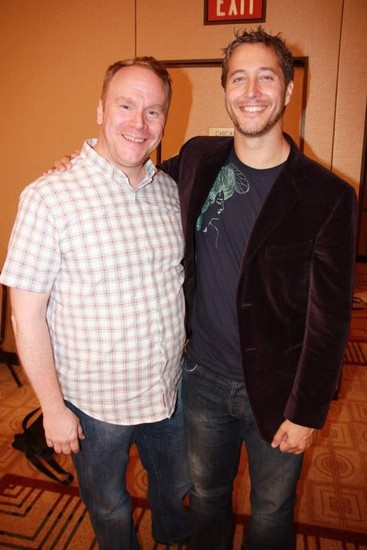 "He's healing hearts," Pearson said as he introduced Potts to the diverse crowd at the Sheraton Hotel and Towers.

In what was a comparison to his grandfather's legacy as a faith healer, one that isn't intentional on Potts' humble part, seems to be the conclusion of many who come to hear him speak, including those in attendance Saturday.

Potts, who is the oldest son of Roberta Potts, grew up in one of the most well known evangelical families, married at 20, had three children and at 30 he came out. The 37-year-old has been estranged from the his family ever since.

"My mother has told me that it's disgusting that I'm openly gay," Potts told GoPride.com in a telephone interview last week from Dallas, where he lives. "They have very strong feelings about me speaking out."

In 2010, he recorded an ‘It Gets Better' video message using a letter to his deceased uncle, Ronnie Roberts, who committed suicide in 1982 after years of struggling with his own sexuality.

During his message on Saturday, Potts shared briefly about Ronnie as he described the parallels in his own story and that of his uncle, both contrasted by tolerance and acceptance.

"Tolerance is not a positive thing," Potts told the responsive crowd. "Do you tolerate yourself or do you accept yourself." He then declared that now is the time for a message larger than tolerance, one of acceptance.

"I think there is a place for tolerance when there is no other alternative, but, in the end, tolerance can be almost worse than intolerance because it appears to be something it is not – acceptance," Potts told GoPride.com.

In preparing for this speaking engagement, Potts said he was most influenced by Donald Webster Cory, who wrote about gay issues in the 1950s.

"I learned a lot from the panel," said Potts. "I learned that sometimes it's helpful to speak to people where they are, and if they are in a place where the Bible is what they look to for authority, there are plenty of verses that suggest that all people should be treated without judgment."

The self-described homebody and father, confessed that the public appearances can sometimes wear him out, but he says "it's also a very refreshing thing to reflect back on later. So many different people come up to me, some for advice, some to shake my hand, some simply to give me a hug and cry a little."

Potts will continue his message of tolerance as he co-hosts a public forum with Alan Acosta at the Los Angeles LGBT Center, 1125 N. McCadden Place, Wed., Aug. 3 at 8 p.m. He will also meet with a representative of GLAAD to interview Troy Perry, founder of the first gay-affirming Christian church.

He is currently working with playwright Ryan Tofil and director Matthew Corozine on an Off-Broadway play based on his memoir, available this fall.

Related:
Listen to Randy Roberts Potts on the Feast of Fun podcast.
Hosts Fausto Fernos and Marc Felion talk to Randy about: What drove his uncle to suicide and what inspires him to write letters in his memory. Meeting Tammy Faye Bakker for the first time. Why many gay men in Dallas love First Lady Laura Bush, despite her husband's anti-gay politics. And more...