Is anti-gay candidate Michele Bachmann married to a gay man? 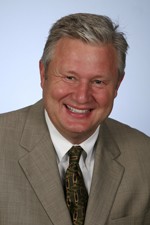 Dr. Bachmann runs his own "Christian Counseling" practice in Minnesota, and one of his specialties is "helping" people "overcome" homosexuality.

But many online pundits are pointing out that those who speak the most vociferously against homosexuality are often hiding something.

"Is it true? He has a Christian clinic where he de-programs gay Boys & Girls! I'm gonna strangle him with my Boa!," tweeted Cher. "...my Gay-Dar is GOING OFF!!!"

Comedienne and actor Dave Foley asked on Twitter, "How can Michele Bachman be opposed to gay marriage when she is married to gay man."

The Daily Show co-creator and pundit Lizz Winstead, tweeted that Bachmann is "The white Al Reynolds."

The hashtag #MarcusBachmanIsSoGay gained traction on Twitter over the weekend.

ThinkProgress found a clip of Dr. Bachmann talking about homosexuality:

"We have to understand: Barbarians need to be educated. They need to be disciplined. And just because someone thinks this or feels this doesn't mean that we're supposed to go down that road. That's what's called a sinful nature. And we have a responsibility as parents and as authority figures not to encourage such thoughts and feelings to move into the action steps.

The clip is embedded below so you can listen and judge for yourself here.

Discussion of Dr. Bachman's sexuality began well before his wife announced her presidential intentions last month. In September 2010, Truth Wins Out posted a video (embedded below) on YouTube of Bachman with the comment, "Comment non necessary," which got a lot of people talking.

It's unclear if his sexuality will become a bigger issue for his Michele Bachmann's GOP campaign or if the jokes and comments circulating amount to gay-bashing.

Louis Weisberg, editor of Wisconsin Gazette," wrote, "As long as the Bachmann's continue to display traits that seem to be at odds with their positions on the issues, they're sure to inspire more ridicule. Whether that ridicule is justified or unseemly is a debate within itself."