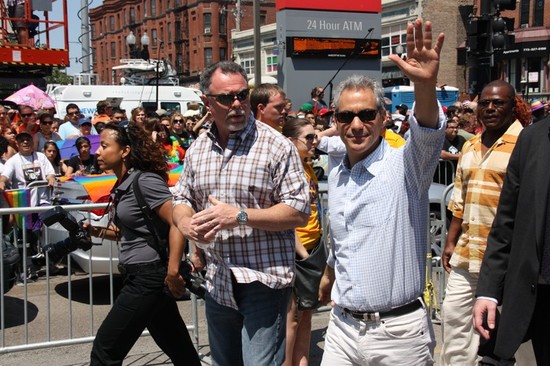 photo credit // kevin wayne
Chicago, IL - The 42nd annual Chicago Pride Parade marched on despite vandalism to 51 of the floats intended for the parade, though potentially record-breaking crowds in Lakeview seemed too much for Chicago Police to control.

In what could be a hate crime, tires on floats were slashed overnight at Associated Attractions on the southwest side. Most of the floats made it to the parade on time as the company rushed to fix the damage at an estimated $20,000.

Floats for Lambda Legal, Rep. Greg Harris and Rep. Kelly Cassidy were among those unable to participate, though the groups participated on foot, according to the Windy City Times.

Despite a rough start in the morning, the parade stepped off at Noon from Halsted St. and Belmont, on time, with Chicago Mayor Rahm Emanuel in the lead.

This year's parade seemed to draw a record number of people to the Lakeview neighborhood, though official estimates from the city have not been released. Last year nearly 450,000 attended the parade.

The Windy City Times exclusively reports the spectators along Halsted St. were packed so tightly that people were forced to scale an 8-foot fence near the Center on Halsted to escape the crush of the crowds.

Photographer Frank Failing, of Male Image Photography, stationed near Halsted St. and Brompton Ave. told ChicagoPride.com that police seemed to leave their posts after float 191 cleared, which allowed spectators to pour into the street. It's unclear what happened, but the error cut the parade short.

Reports of an incident or incidents near Halsted and Belmont resulted in a number of police districts responding to that area, which could be one explanation as to why the officers further north on Halsted left their posts.

Contingent numbers 192 - 240 were then redirected from the parade route to Clark St. virtually ending the parade early with an entry from Maneuver's.

PRIDEChicago, the parade organizers, nor the City of Chicago have released an official statement to what caused the early end to the parade.