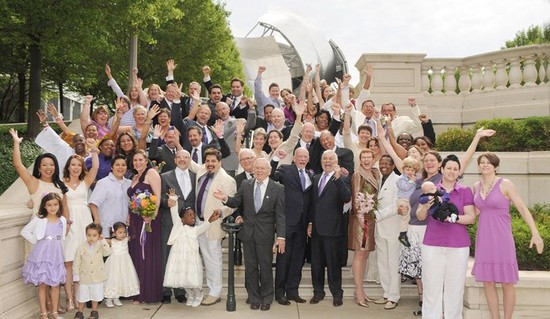 chicago’s ‘unions in the park’

The men were among 35 same-sex couples who gathered on Millennium Park's Wrigley Square Thursday to be joined in 10-minute ceremonies presided over by Cook County Circuit Court Chief Judge Timothy Evans and a number of circuit court judges.

The emotional day of ceremonies opened at 10 a.m. under a beautiful sunny sky with a selection of romantic songs performed by the Chicago Gay Men's Chorus.

"This is indeed a history day, a special day, a day all of us in the Land of Lincoln can celebrate," Gov. Pat Quinn said in opening before a crowd of hundreds.

Quinn, who signed the Illinois Religious Freedom Protect and Civil Union Act into law on Jan. 31, was joined by Chicago Mayor Rahm Emanuel.

"I think that I can say this as a veteran of marriage, it has been a long journey here and to all those who are about to get married and join in civil unions, you have a fruitful journey going forward from the journey that got you to this point," Emanuel told the couples. "And with all of us, you have our blessing."

Some of the other couples, who were picked by Lambda Legal for the high profile event, included Vernita Gray and her partner, Pat Ewert; Equality Illinois founder and owner of Sidetrack Art Johnston and his partner of 38 years, Jose "Pepe" Pena; and The Hearty Boys Steve McDonagh and Dan Smith.

Openly-gay state Rep. Greg Harris, who first introduced the legislation in 2007, was on hand as were a number of other dignitaries, including openly gay state Reps. Deborah Mell and Kelly Cassidy, openly-gay Chicago Alderman Tom Tunney and Chicago Cubs co-owner Laura Ricketts.

Thursday's event was hosted by The City of Chicago Commission On Human Relations Advisory Council on Lesbian, Gay, Bisexual and Transgender Issues and The Chicago Department of Cultural Affairs and Special Events in partnership with the Chicago Office of Tourism and Culture, Lambda Legal, Equality Illinois and the Alliance of Illinois Judges.

"Everywhere I looked today, I saw elated couples with their families, children, parents, friends, all celebrating their love. It was difficult not to be moved," Equality Illinois CEO Bernard Cherkasov told ChicagoPride.com. "I am proud of our State for reaching this day, and I wish all the couples a long and happy life."

On Friday, another mass civil union ceremony will be hosted by The Civil Rights Agenda, a gay rights advocacy group. The event will be held at the Chicago History Museum.

Related: View full gallery from Chicago's 'Union's in the Park'