Thursday's celebration of civil unions in Chicago a 'historic milestone' 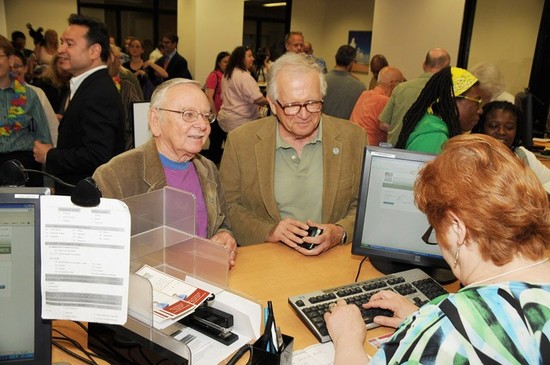 jim and patrick registered for their license on wednesday

Chicago, IL - In another ‘historic milestone' for gay rights in Illinois, Gov. Pat Quinn and Mayor Rahm Emanuel will be on hand Thursday morning as more than 30 couple enter into civil unions at Millennium Park in recognition of the first day of civil unions in Illinois.

The celebration, hosted by Chicago's Commission on Human Relations' Advisory Council on Lesbian, Gay, Bisexual and Transgender Issues, will begin at 10 a.m. in Wrigley Square at Millennium Park, Randolph Street and Michigan Ave.

Stitely Entertainment will provide a string quartet, and the Chicago Gay Men's Chorus will perform a selection of romantic songs to begin the ceremonies.

Hon. Timothy C. Evans, Chief Judge of the Circuit Court of Cook County, and members of the Alliance of Illinois Judges will officiate the civil union ceremonies.

The ceremonies are planned just 24 hours after civil unions first became available to both same-sex and opposite-sex couples in Illinois under a new law signed by Gov. Quinn on Jan. 31.

Cook County David Orr's office issued 203 civil union licenses on Wednesday. An official number of licenses issued statewide has yet to be released.

Jim Darby, a 79-year-old veteran and head of Chicago's American Veterans for Equal Rights, and his partner, Patrick, were one of the first to register on Wednesday with plans to make their 47-year long commitment official during Thursday's ceremony.

In an interview with ChicagoPride.com, Darby confessed, "Many of our straight friends didn't even know the legislation had passed." Then he joked, "And one said I'm marrying up."

On Friday, another mass civil union ceremony will be hosted by The Civil Rights Agenda, a gay rights advocacy group. The event will be held at the Chicago History Museum.