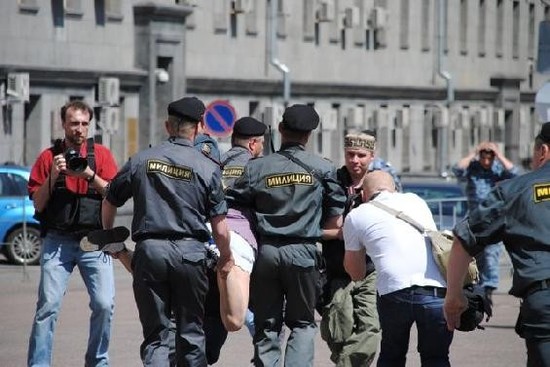 According to reports on the GayRussia website all participants of Moscow Pride, lead by transgender Russian citizen Anna Komarova, were arrested by police on Saturday as they tried to stage near the Kremlin Wall.

They gay rights activists were attacked by members of an ultra-Orthodox group, described as skin heads, who had gathered in anticipation.

Moscow police arrested members of both groups as the gay rights protestors were attacked by the Orthodox group.

"God burned down Sodom and Gomorrah and he will burn down Moscow too if we let things like this happen," an Orthodox group member told the AFP.

Despited being detained by Moscow police, Choi continues to tweet about the arrests, "We are here: Right ear ringing small bleeding, 7 in car including me and Andy Thayer."

Peter Tatchell, an Australian-born British political campaigner, was with the group when they were arrested and has reportedly been released.

According to GayRussia lead organizer Nikolai Alekseev, a total of 18 gay rights activists, including 3 foreign nationals, have been arrested.

The U.S. State Department has not issued a response to the arrest of Thayer and Choi. Thayer was arrested for attending the same Moscow Gay Pride event in 2009.

First online video of the arrests and mayhem in Moscow