'Leatherman' book out just in time for IML Weekend 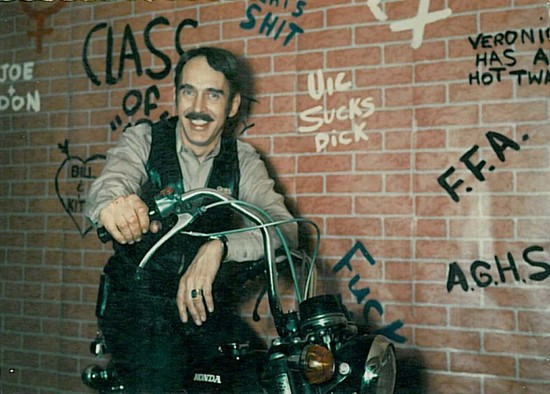 chuck renslow at touche in 1978

photo credit // tracy baim
Chicago, IL - Yes, it is upon us again, that weekend when the leathermen of the world congregate here in the Windy City for a weekend of kink, pleasure and pain: The International Mr. Leather contest and conference.

The book, titled Leatherman: The Legend of Chuck Renslow, is not your typical biographical effort however—and that fact alone says a lot about the work's subject.

"The hard thing with Chuck is that with most peoples' lives, you can tell chronologically in a somewhat simple way," revealed Keehnen," but his life is not one of those lives."

"If we had done it chronologically, we would have used the word 'meanwhile' or something like that way too many times," he laughed.

Renslow's resume of accomplishments and experiences is, indeed, complicated and often seems to carry a certain air of sensationalism due to its breadth alone. Yes, the man founded the Gold Coast bar, one of the city's and country's first openly queer establishments, in the early '60s. The annual leatherman contest that originated there ("Mr. Gold Coast") formed the basis of the IML tradition that remains globally successful today.

"For Chuck, the power of IML is the fact of bringing together of the community that is very empowering for people who, a lot of times, are marginalized or apart from the general community," Keehnen said of the event Renslow helped pioneer. "It's very important for them to come together and see their numbers and share this bond. As a sort of father figure, he seems himself as playing this sort of role to foster his family."

Beyond IML, Renslow became somewhat of a "daddy" to the city's entire LGBT community – a motivation Keehnen came to understand while researching the book. Renslow was a pioneer in photography, opening his male physique magazine-centric business the Kris Studio in 1954, and fronted dozens of businesses through the years, including the Man's Country bathhouse, that anchored the LGBT community's burgeoning visibility in the city throughout a time previously defined by a certain level of discretion.

He also stepped up to save the city's main queer news source, GayLife, at a time when it would have otherwise gone under and, finally, was active in both the city's political and non-profit realms for some time.

With all of these activities often overlapping through the decades, it's not difficult to understand why several other authors have tried to encapsulate the Renslow story but have as of yet not been successful.

An added challenge, both authors admitted, was delineating between the rumors about their subject's life from the facts. But, as they found out, many of those rumors were self-fabricated and his many accomplishments were decidedly not in much need of embellishment to be impressive.

Unfazed, Baim and Keehnen have churned this book out over the course of not much more than six months including some 20 hours of interviews with Renslow himself, who is 81 years old and currently ill with emphysema. They conducted interviews with some 50 or so other individuals who know and have worked with the man, many located over Facebook, in addition to their reference of existing interviews conducted with others who have already passed on.

The fact that so many individuals from Renslow's era had already passed lent a certain air of urgency to their effort to share his story, a principal motivation for both Baim and Keehnen who both admitted to not knowing too much about the leather community heading into the project. His legacy, they hoped to convey, extends far beyond the realm of kink however.

"We definitely pushed very hard to get it out for IML and I'm excited about debuting it for people from around the world this weekend in Chicago," Baim said. "Mainly what we hope for the book is that, as people over the next years, look at gay history or leather history or Chicago history, this is one of the resources they have to draw from."

"I hope we did justice to the man," Keehnen added. "With the breadth of his experience and his involvement in the different areas of the LGBT community, I'd like to think we also captured the evolution of that community both in Chicago as well as within the leather community. He was so central to both those movements and remained so for six decades."

The book is currently on sale through Amazon.com (through the link http://www.tinyurl.com/renslow) or from Women & Children First and Unabridged Bookstores in Chicago. The book will be on sale through the Leather Archives & Museum at the IML Vendor Mart, with Renslow and the authors on hand to sign copies at 2 p.m. daily, this weekend.