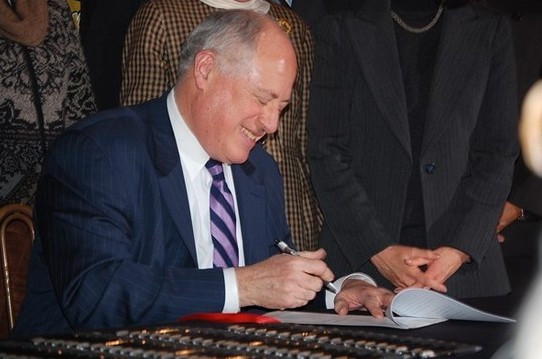 The rally organized by a number of anti-gay groups, including Americans for Life, to "protect marriage" is planned on the eve of a historic day in Illinois.

Next Wednesday Illinois will for the first time recognize civil unions, giving same-sex couples many of the same rights, benefits, and privileges as married couples.

State Rep. Greg Harris (D-Chicago), one of the co-sponsors of Illinois' civil unions legislation, told GoPride.com that the right-wing groups instigating the rally are "hugely upset that in Illinois we have chosen equality for our citizens."

One of the speakers at the anti-gay rally is Peter LaBarbera of Americans for Truth About Homosexuality, a Naperville-based organization identified by the Southern Poverty Law Center as a "hate group." Adam Andrzejewski, a former Republican candidate for Illinois governor, will be the keynote speaker.

During Friday's anti-gay rally, LaBarbera plans to launch the Illinois Defense of Marriage Initiative, urging state lawmakers "to secure by law the definition of marriage in Illinois between one man and one woman."

In 2006 the Illinois Family Institute, then headed by Labarbera, started a petition drive to place an anti-gay marriage amendment in the Illinois Constitution. The petitions were so plagued with errors and questionable signatures that they were ruled invalid by the Illinois Election Commission.

A 1996 Illinois law already prohibits same-sex marriage, but gay-marriage opponents, including LaBarbera, say they fear courts could overturn the law unless the state constitution is changed.

Jacob Meister, Founder and Governing Board President for The Civil Rights Agenda, said the planned rally on Friday "goes back to the days of the end of Jim Crow laws, brought about by fear and long time prejudice."

Pro-gay forces, lead by The Gay Liberation Network, LGBT Change and Join the Impact, will gather at 10:45 AM outside St. Peter's Church, 110 W. Madison Street to demonstrate against the far-right activists assembling there and continue to protest against them as they move over to the State of Illinois Building plaza at the corner of Clark and Randolph Streets.