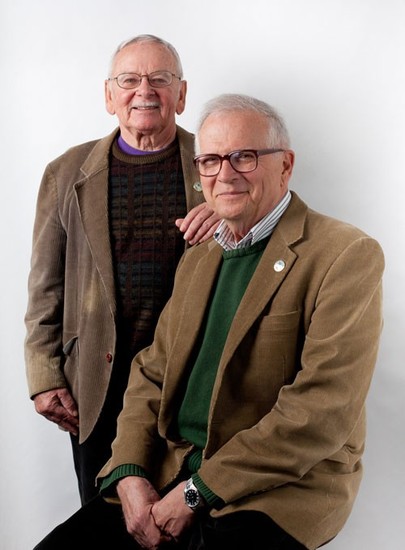 An active member of the American Veterans for Equal Rights organization, and as the secretary of the Chicago Mayor's Veterans Council, Jim will be likely be dressed in military formal when he and life-partner Patrick make their 47-year long commitment official, June 2, 2011. The two are one of 30 couples receiving a civil-union license at a City-sponsored public ceremony taking place at Millennium Park's Wrigley Square, 10 a.m., that day. Planning for the ceremony and Patrick's June-1 birthday, as well as all the many events the Mayor's Veterans Council has scheduled for the coming months have kept Jim "very busy," he says…

Zip Codes were just introduced to the United States two weeks earlier, test pilot Joe Walker was gearing up to take the X-15 on its first sub-orbital spaceflight and the Beatles were working on the release of their second album when—while visiting a friend at the University of Illinois, July 17, 1963—Jim first met Patrick. They moved in together two months later.

"And he brought his dog," Patrick chimes in. Almost five decades later, the two still keep a canine companion.

In the decision to spend the rest of their lives together, "we knew soon enough," Patrick adds, sharing a moment between them when, one evening a few months into dating, he needed to remove his irritating contact lenses and replace them with glasses. To this, Jim then put his glasses on and said, "It's ok, we can both wear glasses in this family."

Both are hoping June 2, will reveal itself to be a beautiful, sunny day as well as serve as a message to the masses that civil unions are happening in Illinois.

"Many of our straight friends didn't even know the legislation had passed," Jim notes. Referencing his Irish to Patrick's Italian decent, he adds, "And one said I'm marrying up."