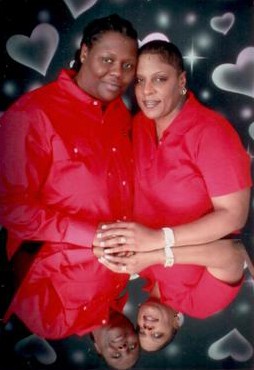 It's sometime in April 2011. Erica is exiting a store, Bed, Bath & Beyond, "Or something like that at the mall," she reminisces. Purchases in hand, her eyes meet with that of her life-partner Wanda waiting for her outside the entrance and, instantly, at the same time, they loudly and openly remind one another, "I love you." As if the two needed to be reminded; they can read each other's minds.

"We just always know what the other's thinking," Erica says. "Just the other day, I saw her in the hallway and she knew I wanted a kiss."

To that Wanda replies, "So, I kissed her."

From their East Roger's Park home, where the couple care for Erica's three sons, they prepare to take part in the mass civil-union ceremony sponsored by The Chicago Advisory Council on LGBT Issues in Millennium Park's Wrigley Square June 2, 2011—"We were destined to be together," Wanda sentimentally adds.

Erica had only just finished checking out Wanda's Myspace.com profile at the community center where she worked ten-minutes earlier when Wanda entered her office in request of the center's services. Erica approached her, asking--in person—if she'd be open to accepting her myspace-friend request. Wanda did. They chatted online. Their first date was at Starbucks. They went to the movies for their second and they've been together ever since.

"I have never loved anyone like I love Wanda," Erica vociferates. "No man, none of my kid's fathers, no relationship has ever come close to this and I wouldn't change it for the world … it's loyal. It's love."

"It's just us," Wanda says of her and Erica's bond and public commitment on June 2, emotionally admitting that she often gets tongue-tied when trying to describe it.

"It's incredible, extraordinary," she starts. "No, it's exceptional. I meant to say ‘exceptional.'"