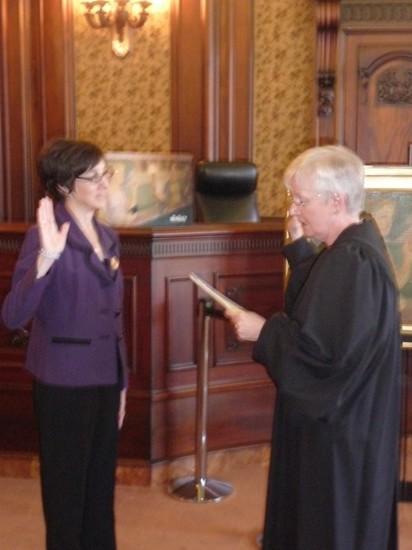 "Standing in the Supreme Court with a small group of LGBT leaders, I felt the significance of Kelly's appointment," said Anthony Martinez Executive Director for The Civil Rights Agenda (TCRA). "Not long ago, having an openly gay or lesbian legislator would have been unthinkable.  Now, Illinois has three -- and the first LGBT legislator with children."

"It is a personal honor and privilege to serve with all of you here. I am excited to start working. and as my father always told me, I plan to lead with two ears and follow with my mouth, because one should listen more than one speaks," Cassidy said as she addressed the House.

"I've known Kelly for years," said long-time LGBT activist Rick Garcia. "Springfield, the House, can be difficult to navigate but Kelly has the experience to hit the ground running. Her district and LGBT people throughout the State are lucky to have her."

TCRA is sponsoring a reception to honor Representative Cassidy this evening at The State House Inn in Springfield.