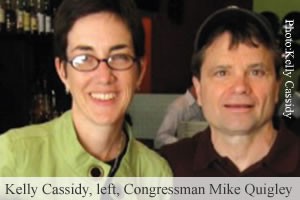 Springfield, Illinois - Illinois Democrats have picked lesbian activist Kelly Cassidy to fill a House seat being vacated by Representative Harry Osterman, who was elected to the Chicago City Council in February, the Chicago Sun-Times reported.

The 42-year-old Cassidy was picked from a field of 23 candidates on Saturday. She's a longtime assistant in the Cook County state attorney's office.

"For 20 years in Chicago, I've worked in not-for-profit and government," Cassidy told the paper. "This is an opportunity to take it to the next level and an exciting challenge."

Also vying for the position were transgender activist Catherine Sikora, vice president of the board of Equality Illinois, and Paula Basta, the openly gay regional director of the Levy Center, a group that serves seniors in Chicago.

"Although I am respectful of the laws governing the appointment process for this vacancy, I believe the only true way to earn this seat is through the democratic process where the people get to choose who represents their voices. That is why I am announcing without a doubt that I will run for this seat in 2012," Basta said.