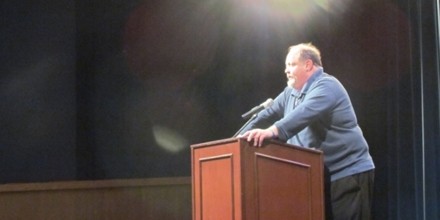 “I think that he’s a sociopath,” Nate Phelps said of his father

St. Louis, Missouri - Nate Phelps, the son of Rev. Fred Phelps of the Westboro Baptist Church (WBC), is offering a different and horrifying perspective of the controversial church and it's anti-gay leader.


TheVitalVoice.com reports Nate, the seventh of 13 children, spoke to an audience of over 500 people comprised of students and members of the lesbian, gay, bisexual and transgender (LGBT) community at Clayton High School outside of St. Louis, Missouri on March 10.

The younger Phelps told of the brutality and abuse that his father inflicted upon their family. He maintains his father balanced attending law school with a wife and a dozen-plus children by relying on a cocktail of barbiturates and amphetamines to cope.

The 81-year-old Fred Phelps heads the Topeka-based hate church, which is not affiliated with a larger denomination and is made up mostly of his immediate family. The church gained national attention when they protested at the funeral of Matthew Shephard with signs that read "No Fags in Heaven" and "God Hates Fags."

At 18, Nate escaped from what he says was years of abuse at the hands of his father. Prior to his successful escape, two of Nate's older siblings attempted to leave. Mark successfully fled at 18 and lives in California. His sister Kathy, who left at 17, was reportedly forced back and beaten.

"I left the night I turned 18, literally at midnight," Phelps said. "I knew I was going to do it when I turned 15 or so. I bought a car when I was 17—hid it—no one knew it was mine. [I] packed my stuff up and at 11:30 on the night of my 18th birthday, I backed it into the driveway and loaded it up and went inside. [I] waited for the clock to hit midnight, and then I left."

Nate, who first joined his brother in California, now lives in Calgary, Alberta and works for the Center for Inquiry. He believes speaking out against WBC is his way of atoning for the evil inflicted by his own family.

WBC recently won a free speech Supreme Court case allowing them to continue protesting at the funerals of fallen U.S. soldiers and is now
threatening to protest at the funeral for seven Pennsylvania children who died in a fire earlier this week.