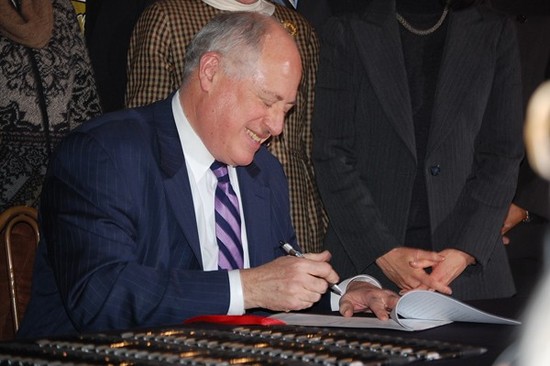 Chicago, IL - Joined Monday by lawmakers, advocates and hundreds of Illinois residents Gov. Pat Quinn signed into law the Illinois Religious Freedom and Protection and Civil Union Act at a signing ceremony in downtown Chicago. His signature represents a long-fought victory toward fairness for thousands of gay and lesbian couples in Illinois.

"It is special honor to be part of this day in history," Gov. Quinn said as the overflow crowd applauded, cheered and snapped pictures at the Chicago Cultural Center. "Our state began in 1818 and here we are in 2011 on the eve of Lincoln's birthday because we believe in civil rights and civil unions."

The measure was first introduced in February of 2007 by then-newly elected state Rep. Greg Harris (D-Chicago). SB 1716, sponsored by Harris and state Sen. Dave Koehler (D-46th District) was approved by the General Assembly in early December.

"As great a victory as we celebrate today, there's more to be done – things can better," Harris told the crowd. "Thank you, Greg!" someone shouted from the back of the room.

"My father used to say, ‘If your daughter and son come to you and tell you that they're gay, and you have a problem with it, you don't deserve to call yourself a parent' -- That's the kind of support I have at home," Mell said.

Then Mell thanked long-time gay rights activist Rick Garcia, which was followed by the sound of thunderous applause. "We love you, Rick!" someone shouted.

Lisa Madigan addressed the crowd and remembered the late Larry McKeon, the first openly gay Illinois legislator, who died in 2008 at the age of 63.

Rutherford was the last to address the crowd.

"I am from a small town in central Illinois and I am a Republican, and I am proud of it. As this bill move forward, I felt I just needed to do the right thing," Rutherford said. "January 2009 I resigned from the Senate as the civil unions bill made its way through, and my very last bill of 18 years as part of the Senate was to vote yes on the civil unions bill."

"I know that traveling all over Illinois that there are people who are uncomfortable but know this must go forward, I am proud to be from a small town, a Republican and to be here today."

Following the applause, Gov. Quinn said, "This is the moment long after we are gone, people will remember us. On Jan. 31, 2011, we came together in Illinois, the land of Lincoln and made history."

Civil unions were then signed into law, as Illinois becomes the twelfth U.S. state or district to grant legal recognition to same-sex relationships through either civil unions or marriage.

Chicago Mayor Richard Daley was not present. Rahm Emanuel attended the reception at the Cultural Center after the signing and was the only Chicago mayoral candidate to attend.