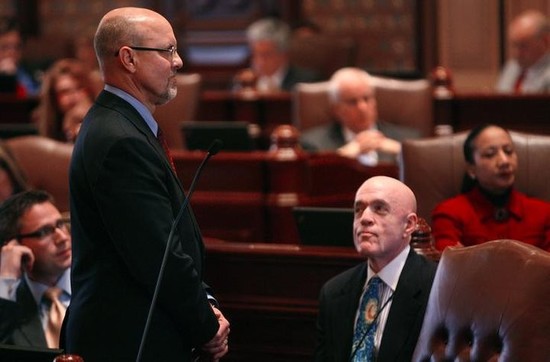 The architect behind the bill, openly-gay State Rep. Greg Harris (D-Chicago), announced the date on his Facebook page on Saturday.

A source close to the planning tells ChicagoPride.com that the signing ceremony will be held at 4 p.m. on Jan. 31 at the Chicago Cultural Center, 78 E. Washington, in Chicago's Loop.

"It is hard to believe 6 years ago when I got arrested for advocating for marriage equality, that I would the first lesbian serving in the state legislature, be able to vote for civil unions and speak at the bill signing," said Mell. "This impacts Christin and I very personally because we are getting married this year. It is great for Illinois and the advancement of true equality."

With the event open to the public, organizers anticipate a large crowd and they plan to offer first come, first served seating. ChicagoPride.com is told a satellite seating area will be available with closed circuit video coverage planned for the overflow, which is anticipated to be over a thousand people.

Complete details are expected to be announced this week.

With Gov. Quinn's signature, gay and lesbian couples will be able to have their unions legally recognized by the state effective June 1, 2011.

"Of the handful of states that have achieved change through the legislative process, Illinois is the only state that is not located on one of the coasts," The Civil Rights Agenda (TCRA) president Jacob Meister told ChicagoPride.com. "Illinois will surely pave the way for other states in the heartland to legislatively grant rights to same-sex couples."

TCRA, like Equality Illinois, was instrumental in lobbying the Illinois General Assembly to pass the civil unions legislation.

The bill does not recognize same-sex marriages, but will provide the same spousal rights to same-sex partners when it comes to surrogate decision-making for medical treatment, survivorship, adoptions, and accident and health insurance.

Passage of the bill by the Illinois legislature and signing by Gov. Quinn reflects public opinion in Illinois that same-sex couples need recognition under the law. An October 2010 poll by the Paul Simon Public Policy Institute of likely Illinois voters shows 67.5% approve of civil unions or marriage for same-sex couples.

Conservative groups, including the Catholic Conference of Illinois and Washington D.C.-based National Organization for Marriage (NOM), lobbied aggressively against the bill.