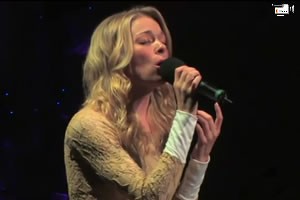 Los Angeles, CA - LeAnn Rimes joined the Gay Men's Chorus of Los Angeles on Sunday at their annual Christmas musical extravaganza titled Comfort & Joy, which was dedicated to the memory of troubled gay teens who had committed suicide after being bullied.

The 28-year-old country music legend first sang Rockin' Around the Christmas Tree and All I Want for Christmas is You in a revealing Santa dress as boyfriend Eddie Cibirian (CSI:Miami) and family members looked on.

After a dress change, Rimes returned to the stage holding a single red rose. She became emotional as she dedicated her final song to gay teens who had been bullied to death.

"It's been an incredible year, but also a very tragic year for a lot of young gay men and women who have been taking their own lives because they can't be themselves," Rimes said.

When she started to choke up, an audience member yelled out, "We love you!"

"It's really sad when people can't be themselves," she added before singing The Rose in a duet with chorus.